From the Manifesto Club comes this news of a poem removed by the AQA (the awarding body for A-level exams and GCSE's) from the GCSE (General certificate of secondary education) syllabus in Great Britain.

The poem is entitled "Education for Leisure" and was written by the award-winning poet, Carol Ann Duffy. It can be found here.

Syllabi change all the time, but this case is special, since the decision to remove it was spurred by an exam invigilator, Pat Schofield, who apparently felt the poem glorified knife crime. She is quoted as saying, "I think it is absolutely horrendous - what sort of message is that to give to kids who are reading it as part of their GCSE syllabus?"

What's next, banning The Charge of the Light Brigade because it glorifies suicidal military exploits?

The AQA itself responded with these weasel words: "The decision to withdraw the poem was not taken lightly and only after due consideration of the issues involved. We believe the decision underlines the often difficult balance that exists between encouraging and facilitating young people to think critically about difficult but important topics and the need to do this in a way which is sensitive to social issues and public concern."

It looks like Carol Ann Duffy got the last laugh, however. She's written a response entitled Mrs. Schofield's GCSE. How fitting that Schofield, like Bowdler, will pass into the language as a synonym for small-minded censorship.

You must prepare your bosom for his knife,

said Portia to Antonio in which

of Shakespeare's Comedies? Who killed his wife,

insane with jealousy? And which Scots witch

knew Something wicked this way comes? Who said

Is this a dagger which I see? Which Tragedy?

Whose blade was drawn which led to Tybalt's death?

To whom did dying Caesar say Et tu? And why?

Something is rotten in the state of Denmark - do you

know what this means? Explain how poetry

above the weeping, laughing earth; how we

make prayers of it. Nothing will come of nothing:

speak again. Said by which King? You may begin.

Posted by Jeffrey Shallit at 9:20 AM 2 comments:

I wrote about this before. John McCain mangles English almost as much as George Bush. On two occasions he's used the nonexistent word "epitat" instead of "epithet", and now a report from the Boston Globe has him saying "predicate" instead of "precedent".
Posted by Jeffrey Shallit at 3:47 AM 3 comments: 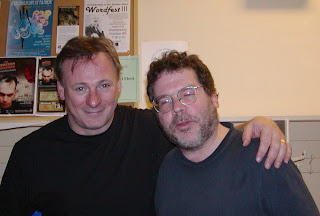 One of the nicest things about having a blog is meeting interesting people online, and then in real life. (Of course, you also meet some unpleasant loonies, but that's fodder for another post.)

Last May Recursivity got some fan mail from Tony McManus, a guitarist who lives in nearby Elora, Ontario. Actually, calling him a "guitarist" is somewhat of an understatement; he has been called "the best Celtic guitarist in the world". Tony studied ring theory under Peter Vámos at the University of Exeter before giving up mathematics for music.

Tony was kind enough to leave tickets for me and my family to attend his concert in Elora, and last night we all went. Tony's music was phenomenal, combining an intense virtuosity with a percussive style that left the audience breathless. He predominantly played Celtic tunes, but there was quite a lot of variety (including a Bulgarian piece and two pieces played on a special guitar, designed by a Toronto guitar maker, that sounds like a sitar). The variety of sounds he can get from a guitar made me really envious. In between tunes, Tony told us a lot of great stories about drunk Celtic musicians. We all had a terrific time.

Tony was accompanied by Rolly Brown, a fingerpicker now living in Bucks County, Pennsylvania, near where I grew up. In addition to guitar, Rolly is an acupuncturist, a Tai Chi instructor, and he raises Australian dogs. Rolly played some Reverend Gary Davis, Steve Mann, and he closed with a take-off on Julie Gold's "From a Distance" (made famous by Nanci Griffith) written by Jay Mankita in 1992: "From a Dog's Stance". The audience was in stitches.

If you ever get a chance to see Tony McManus or Rolly Brown, take it! Tony gives concerts and workshops all across the world. I guarantee you'll have a great time.
Posted by Jeffrey Shallit at 11:05 AM 1 comment:

Here is my nomination for the best newspaper headline of the year: