No, Denyse, Frank Church is not a Geneticist

Pic, because probably it will get silently corrected or deleted: 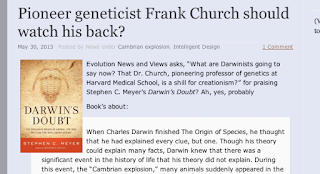 The real geneticist is George Church. Why he would endorse creationist Stephen Meyer's book is an interesting question, but one I can't answer for now.

As for the other endorsers, who is surprised that longtime ID advocate Russell Carlson would endorse Stephen Meyer's book? After all, Carlson was apparently not astute enough to detect all the problems with Dembski's claims about information.

Who is surprised that J. Scott Turner would endorse the book? Like Carlson, he's on the editorial board of the intelligent design vanity journal, Bio-Complexity. And, in the past, Turner has shown himself less than perceptive about the ID movement.

Who is surprised that creationist Wolf-Ekkehard Lönnig, also on the board of Bio-Complexity, would endorse the book?

As for the other endorsers, anyone who would accept Dean Koontz or George Gilder's opinion about a scientific issue gets exactly what he deserves.

Posted by Jeffrey Shallit at 4:55 AM 4 comments:

I announce that I am boycotting Australian National University (ANU) for one year, unless the Vice-Chancellor resigns or apologizes. I strongly encourage other academics to join me and do likewise.

ANU's student newspaper, the Woroni, published a satirical cartoon about Islam, one in a series of similar cartoons that had already been published about Catholicism, Scientology, Mormonism, and Judaism. The cartoon can be found here. Of these five groups, apparently only Islam had adherents that couldn't handle the rather gentle satire in the cartoon, and complained to the Vice-Chancellor's office.

The Vice-Chancellor, Ian Young, took the most heavy-handed route possible, threatening the students unless the cartoon was removed. His rationale was a textbook example of the heckler's veto, in which speech is restricted because of the claimed potential for inducing violent behavior in others.

The Woroni issued a statement in which more details can be found about the incident.

This kind of censorship is utterly reprehensible in my view. No sensible or reasonable person could see that cartoon and believe it was over-the-top. I urge everyone to write Ian Young directly to let him know your view of his authoritarian and irresponsible action, and join the boycott of ANU.

Posted by Jeffrey Shallit at 5:08 AM 7 comments:

Here she cites an article in the Washington Post about the distribution of atheists worldwide. Not bothering to even read the article carefully, Denyse opines, "Canada is a pretty “free” nation, but I doubt you’d get five percent to say they were definitely atheists."

Screenshot, in case it goes the usual way of stupidity on Uncommon Descent and vanishes without a trace: 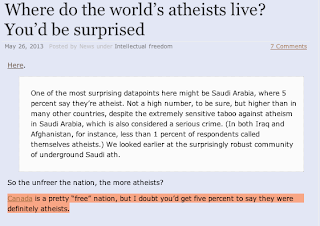 Had Denyse bothered to follow the link right in the article she cites, she would have found that the figure for Canada is 9%.

But, you know, responsible journalism is what we can expect from that old stupid "legacy media".

One of her recurring fantasies, as RationalWiki puts it, is that "New York Times subscribers [will be] tuning out of print media and tuning on to her bottom barrel blog sites."

Take a look at this one. Why, it's just the thing for New York Times subscribers! Or at least those subscribers who don't care about

Yes, it's amusing. But I really wonder why would anyone in their right mind hire this deluded hack to write anything?
Posted by Jeffrey Shallit at 10:35 AM No comments:

This blog finally hit a milestone: a million page views:

Strange to think that I reach so many more people through this blog than I do with my "real" work: mathematics and computer science.

I am very happy to see that Denyse "Sneery" O'Leary, the world's worst journalist™, is back as a daily contributor to the creationist site, Uncommon Descent.

We can now look forward to months of mangled syntax, non sequiturs, sneers and defamation against legitimate scientists, vapid and effusive praise of anyone she thinks is a Darwin denier, and relentless plugging of her books. It promises to be a real cornucopia of stupidity.

In just her first week back, she

What you will never see, however, is Denyse actually interviewing anyone other than her favorite anti-evolutionary crackpots. Because that, you know, would actually involve real journalism. Why do real work when you can just summarize pop science?

Welcome back, Denyse! Get the popcorn.

Here's a new bike rack that just went up on Gaukel Street in downtown Kitchener. I like the design! 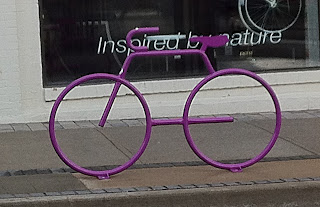 Posted by Jeffrey Shallit at 11:25 AM No comments:

From reader RM comes this story about moose in Connecticut, and this warning for drivers.

Now, if they would only warn the moose about the cars...

Today at about 9:45 AM, there was a mild earthquake in Waterloo Region. No damage in my building.

Posted by Jeffrey Shallit at 9:47 AM 3 comments:

Recommended by son #2, this nice (but probably faked?) view of a moose family relaxing by the pool:

Posted by Jeffrey Shallit at 3:30 AM 2 comments: 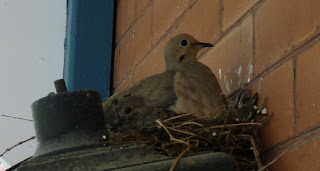 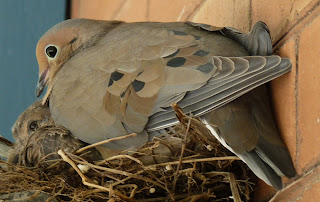 Mourning doves nesting with young on top of our porch light again this year....

Posted by Jeffrey Shallit at 8:39 AM 2 comments:

The Christian Right likes to suggest that atheists are secretly Muslims. Some Muslims, on the other hand, like to claim that no real Muslim could be a terrorist.

But when you listen to the guy recently charged in planning an attack on VIA trains here in Canada, Chiheb Esseghaier, who does he sound like?

“First of all, my comment is the following because all of those conclusions was taken out based on Criminal Code,” he said.

“All of us we know that this Criminal Code is not holy book, it’s just written by set of creations and the creations – they’re not perfect because only the Creator is perfect so if we are basing our judgment … we cannot rely on the conclusions taken out from these judgments.”

That sounds like it could have come directly out of the mouth of a Christian reconstructionist, doesn't it?

I am the editor for an electronic journal, the Journal of Integer Sequences. We only accept submissions in LaTeX format, which are then converted to ps, dvi, and pdf files for publication.

While most authors do a reasonable job preparing their papers in LaTeX, a reasonable fraction do not. After more than ten years of editing this journal, I've noted the following ten common LaTeX errors that authors make again and again.

1. Failure to use built-in LaTeX commands when they are available. Don't reinvent the wheel. There are lots of useful constructs available in the packages amsmath, amssymb, amsfonts, and amsthm, so your LaTeX file should include the following line in the preamble:

2. Failure to follow basic conventions of mathematical exposition. For example, a common convention is that one-letter functions should be given in the italic font (which in LaTeX can be achieved with, say $f(x) = y$), while multi-letter functions are typically given in the roman font (and can be achieved, for example, with \sin, \cos, \tan, \log, \ln, \exp, \min, \max, etc.). But what to do when faced with a function like "lcm" for which there is no built-in definition? Then you just say

in the preamble, allowing you to write, for example, $\lcm(x,y) = z$ and have it appear correctly.

3. Failure to use "mod" correctly. If it is used as an equivalence relation, then you can write (for example)

which displays correctly for centered equations. In-line, however, you should write $x \equiv y$ (mod $z$) to get the proper spacing. Sometimes, however, you want to do this all in-line without moving in and out of math mode. Then you need a definition in the preamble like

which can be used like $x \equiv \modd{y} {z}$. I find it very useful and wish it were built-in in LaTeX.

If you use mod as a function, then the syntax is different. Write $x = y \bmod z$ in this case.

5. Incorrect case statements. Sometimes writers use an array environment to make these, instead of the built-in case environment, which can be used as follows:

Note the use of the \text{...} command, which makes sure the enclosed material is in the default (roman) font.

6. Failure to use labels. Mathematicians are intimately familiar with the concept of variables; yet it is really amazing that they often do not use them when preparing LaTeX documents, preferring to "hard-wire" references to theorems, lemmas, and so forth. Everything in a document that is referred to later on should get a label: theorems, lemmas, corollaries, remarks, tables, figures, sections, and so forth. Doing so makes rearranging or inserting new results trivial.

10. Obsessive tweaking of the spacing. If your file contains lots of invocations of commands like \\, \noindent, \newpage, \bigskip, \medskip, \smallskip, \newline, \pagebreak, \linebreak, you're probably doing something wrong. LaTeX's own choice of spacing is usually pretty good, and the need to tweak it should be rather rare. In particular, I've had authors submit papers with \\ at the end of every paragraph!

And, for lagniappe, here's number 11:

11. Wrong angle brackets.. Use \langle and \rangle for left and right angle brackets, for example, in group presentations. Don't use < and >, which result in ugly output.

If you have other pet peeves about lousy LaTeX usage, feel free to add them here.

From Eric Rowland, a pair of moose at College and Bellevue in Toronto. 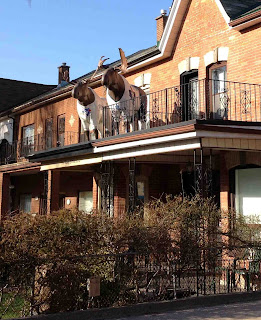