Muddled Thinking about Free Will

Over at his blog, in support of the existence of "free will", David Heddle says (in a comment):

If free will is an illusion, then deterrents are an illusion. How can a deterrent make me choose not to commit a crime, unless I have the facility of choice?

I think this is more muddled thinking about free will. I still don't know what free will is supposed to mean, exactly, and I don't think anyone else does, either.

But, ignoring this, let's address Heddle's claim. Could deterrents work on humans if they have no free will? I think the answer is clearly, yes. Let's pretend that humans are soulless computational machines, shaped by evolution, who act based on a very very very complicated algorithm that takes sensory impressions as inputs and produces actions as outputs. Let's say that this algorithm tends, generally speaking, to try to ensure survival and pleasure and reproduction of the individual. Now the human machine suddenly sees resources, for the taking, that belong to another. The human machine does a cost-benefit analysis to "decide" whether to take the resources or not. In the absence of a known deterrent, such as a dangerous dog or future incarceration, the human machine may decide to take the resource. In the presence of a deterrent, the human machine may make another decision.

How does this involve "free will"? You can call this decision-making "free will" if you like. But then a thermostat has free will, too.

It's not at all surprising to anyone who thinks about computation for a living that a complicated algorithm can result in different behavior based on different inputs. The mystery to me is why Heddle thinks this says anything about free will.

Here's a great post about the phrase "beg the question", it history, and what to do about its misuse.
Posted by Jeffrey Shallit at 7:05 AM 3 comments:

This month's Authoritarianism Award goes to Ricky Clapton, superintendent of the Copiah County schools in Hazlehurst, Mississippi. Mr. Clapton erased a student from her class yearbook. And what was her offense? Did she murder someone, or cheat on her final exams? No. She wore a tuxedo instead of a dress.

When asked about it, Mr. Clapton retreated behind legalese, saying "We have had our legal counsel research the validity of the position of the School District on this matter.. We are informed by counsel that this exact issue has been litigated in federal court. The decisions of the federal courts completely support the policy of the district in this regard. It is the desire of the Copiah County School District to inform, first, the patrons of the district, and second, all other interested parties, that its position is not arbitrary, capricious or unlawful, but is based upon sound educational policy and legal precedent."

Congratulations, Mr. Clapton. Your award is well-deserved.
Posted by Jeffrey Shallit at 6:42 AM 16 comments:

Well, this doesn't do exactly what I'd want - but latexsearch is at least a start to making mathematical equations searchable.
Posted by Jeffrey Shallit at 9:01 AM 6 comments:

The Boston Marathon went by on Commonwealth Avenue, just a few blocks away from where I'm living in Newton. We watched at about mile 20 of the course, at the start of the infamous Newton hills, the most famous of which is called "Heartbreak Hill".

Here are a few pictures: 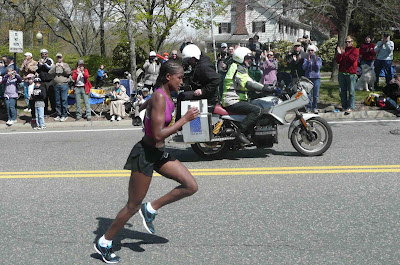 Above: Teyba Erkesso, the top woman finisher, from Ethiopia, all alone with a very substantial lead near mile 20. She would fade and still win, but only by a few seconds. 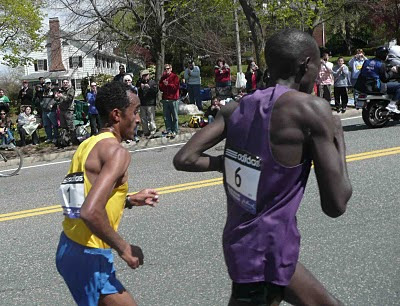 Above: Robert Cheruiyot (#6) and Deriba Merga (#1) duelling near mile 20. Cheruiyot would win in 2:05:52, a minute and a half ahead of his nearest competitor.

Wheelchair marathoners near mile 20: In the front, from left to right: Kota Hokinoue of Japan (finished 3rd); Soejima Masazumi of Japan (finished 4th); Ernst van Dyk of South Africa (the winner). In the back: Roger Puigbo of Spain (finished 5th) and Kriga Schabort of the USA (finished 2nd).
Posted by Jeffrey Shallit at 12:22 PM 11 comments:

Needless to say, such numerology is not considered very highly by most mathematicians. It depends too much on the choice of passage, and the method of calculation. In this page, the author decides that the proper measure is the number of letters times the product of the letters divided by the number of words times the product of the words, but on what basis? And even then, he must remove powers of 10 to get his desired result, and cheat in other ways, such as considering a comma as a letter for one calculation, but not another.

Sad to say, this kind of foolishness is the one area where devout Jews and Muslims find agreement. Numerology has wide currency among many Jewish people, where it is called gematria, and among Muslims such as Louis Farrakhan, who says things like, "What is so deep about this number 19? Why are we standing on the Capitol steps today? That number 19 -- when you have a nine you have a womb that is pregnant. And when you have a one standing by the nine, it means that there's something secret that has to be unfolded."
Posted by Jeffrey Shallit at 7:58 AM 19 comments:

Jesus Off Limits for Criticism

Here's a laughable press release from a Christian group that claims "Blasphemy does not qualify as free speech".

They're wrong. It does.

They go on to claim, "Gallaudet University has no right to harm and slander the spotless reputation of the God-Man with blasphemy".

They're wrong. It does.

Look for more and more demands from fundamentalist believers of all religions that criticism of their beliefs be outlawed.
Posted by Jeffrey Shallit at 9:50 AM 9 comments:

Ignoramus of the Month: Denyse O'Leary

Not all intelligent design advocates are dishonest. Some of them are merely ignorant, abysmally ignorant, pig-stupefyingly-ignorant of the theory they criticize.

So the claim is, "changed shape, changed size, changed metabolism and changed food source. How much more MACRO do you expect an organism to evolve?"

Hmmmm. Kittens do this all the time.

Change size? You bet. Goes from a couple of ounces to five lbs in half a year.

Confusing development of an individual with evolution in a population? That's a misconception about evolution that is usually ironed out in high school. Looks like Denyse was absent that day. I'd blame Pokemon, but I think Denyse is far too ancient for that.

Denyse O'Leary: our ignoramus of the month.


Update: O'Leary's posting was apparently too stupid even for her. It now seems to have disappeared from her website.

Further update: it's now back here.
Posted by Jeffrey Shallit at 8:40 AM 20 comments:

Now that the contract has finally been signed, I can reveal my sabbatical project: 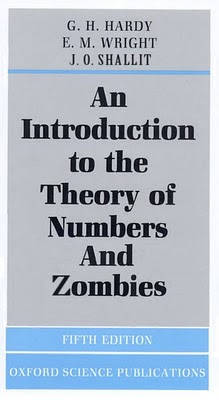 Oxford University Press will be publishing my latest book, An Introduction to the Theory of Numbers and Zombies. This is a revised edition of the classic text of Hardy and Wright, modified to include new results in algebraic number theory and zombiosis. I am particularly proud of the new chapter that discusses Wiles' proof of Fermat's last theorem, which has a short section mentioning how Wiles was able to defend himself from a zombified Ken Ribet using the Tate module and a meat cleaver.

This is just one of a series of new editions of classic mathematical books that have been updated for the 21st century. I am really looking forward to the updated version of Constance's Reid's book, entitled David Hilbert: Vampire Slayer.