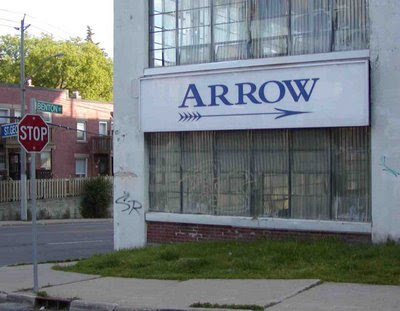 Just in case you didn't know what an arrow was, this sign on a Kitchener street helpfully explains it.

Posted by Jeffrey Shallit at 7:00 AM 2 comments: 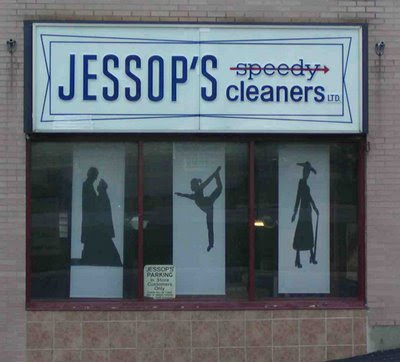 Whenever I pass by this dry cleaner's, I am always struck by the logo. The arrow through "speedy" is obviously meant to convey speed, but for me it just looks like the word "speedy" has been struck out. They used to be speedy, it says to me, but aren't any longer. Logo fail!
Posted by Jeffrey Shallit at 9:43 AM No comments:

Christian Science Peddled at the University of Waterloo

Yesterday I attended a talk by Christian Scientist Barbara Fife entitled "The Power of Prayer", held at the University of Waterloo in the building where I work, the Davis Centre. Although the room can hold about 250 people, I would estimate that no more than about 25 people were present.

Supposed evidence for Christian Science claims is nearly always anecdotal, and Barbara Fife did not disappoint there. She started with an anecdote about her husband who wanted to quit smoking. She prayed for him, and he was able to quit. This was offered in support of the idea that prayer can bring about change. From a scientific point of view, however, this kind of claim is essentially worthless, since it does not have any control. What if she had not prayed? Maybe her husband would have quit even sooner! Without a control, it is impossible to conclude that prayer was effective.

Ms. Fife discussed various definitions of prayer. In one definition, a prayer is a petition. Prayer, she claimed, is more effective if it is for self-improvement rather than material gain. Her prayer for her husband was unselfish and so it was answered.

Ms. Fife discussed various aspects of Mary Baker Eddy's life. She claimed Ms. Eddy was "scientific", when in fact Eddy conducted no experiments, had no scientific training, and was completely unfamiliar with the notion of double-blind study.

Ms. Fife related the story of her son, who had a bike accident and hit his head while at Principia College, the only Christian Science institution of higher learning in the world. Afterwards he threw up. Although his face was gouged, he was only treated with prayer and cleaning and bandaging of the wound and quickly recovered. Three weeks later at graduation his wounds were hardly visible. Again, this was offered as proving the power of prayer. But it is not surprising at all that one can naturally recover, without prayer, in three weeks from a wound like that. And it is certainly irresponsible, after a head injury with vomiting, that one does not get checked out by a competent neurologist.

She said that "God had a divine purpose" for everyone and nothing could change that, certainly not a bike accident. It makes me wonder, what was the divine unchangeable purpose behind Pol Pot?

Prayer, Ms. Fife claimed, helps us see and think differently. It is not to help God hear us; it is for us to be close to God.

She told the story of a woman who had uterine fibroid tumors. After she took up Christian Science the tumors shrank and disappeared. She did not mention the fact that fibroid tumors often shrink spontaneously, and this is perhaps due to changes in estrogen levels.

Ms. Fife claimed that Mary Baker Eddy's book Science and Health actually heals; there is a 130-year history of healings. Mary Baker Eddy "proved everything she wrote". There is a law of God underlying Creation. Anyone can pray and find healing.

All told, it was a fairly typical Christian Science performance: vague stories of healings, usually with no names given; claims of miraculous healing following prayer; no controlled studies ever referred to. After tepid applause, Ms. Fife did not take questions from the audience.

Why was the University of Waterloo chosen as the venue for this talk? Possibly it was due to a wildly optimistic forecast of the number of attendees, but I would guess it was partly to give a "scientific" veneer to the claims made.
Posted by Jeffrey Shallit at 8:58 AM 6 comments:

Denyse O'Leary is a local Roman Catholic pro-intelligent-design, anti-evolution "journalist" whose writing is typically at the grade six level -- perfect for her audience. Based on what I've seen, she seems impervious to actual argument, preferring instead to slam what she delightfully calls "Darwinbots". In her writing, she rarely interviews people who disagree with her, and she elevates people who agree with her to the status of authorities. For example, she routinely refers to creationist David Tyler as a "physicist"; I guess that sounds better than admitting that he is a professor of "clothing design and technology".

But today she has sunk to a new low, by attempting to blame the recent murder at the Holocaust museum on Darwin's theory of evolution. Nearly all the commenters point out how insane this is, but, as usual, O'Leary is completely impervious to their reasoning.

If O'Leary were consistent, she'd also be blaming the crash of Air France 447 on Newton's theory of gravity.

Update: no surprise here - O'Leary's claimed "breaking story" isn't original with her; it comes from the odious David Klinghoffer.
Posted by Jeffrey Shallit at 5:28 AM 2 comments:

Mathematical Reviews is a journal that attempts to provide a brief review of every legitimate paper published in the mathematical literature. Reviews are intended to summarize the content of the paper and put it into context, but sometimes the opinion of the reviewer shows through.

Here is one that I stumbled on today: "In the paper under review, ... performs elementary manipulations to produce several equations. The first few of these formulas involve Pr(n,k), the number of partitions of n into k relatively prime parts, while the last few involve R(n,k), the number of decompositions of n into k relatively prime parts. These formulas do not provide insight into the behavior of Pr(n,k) and R(n,k) so much as they demonstrate what sort of formulas result from certain elementary manipulations."

I have to admit, I wrote a review like that once, too. Here's an excerpt: "Their main result, Lemma 2.1, is equivalent to the statement that multiplication of 2 × 2 matrices is associative."
Posted by Jeffrey Shallit at 4:54 PM 1 comment: