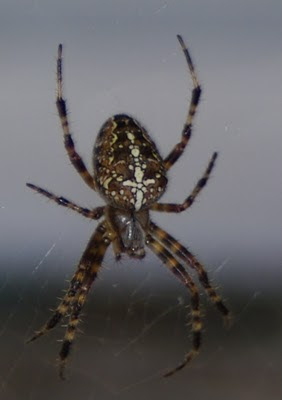 Found this one in my basement. Can anyone identify the species? It's about 4 cm tall.
Posted by Jeffrey Shallit at 1:50 PM 10 comments:

Here's an opinion piece by monarchist Jeffrey Tighe in the National Post.

If this is the kind of reasoning the monarchists are proud of, then the republicans have already won.

Tighe invents a straw man, claiming that republicans believe "all world cultures are of equal value in Canada, except the “British” one". Actually, I think the British are admirable in many ways -- I just find the idea of an unelected head of state, chosen solely by heredity, to be childish and archaic.

He ends with "There’s room for all who wish to enter its walls, but living here requires a commitment to Queen and country". I guess I'm not welcome then.

Jovana Gec, an AP reporter, was scammed by a Serb family near Belgrade into believing that two children have "magnetic" properties that allow silverware to stick to their bodies.

The accompanying photos do not show a single piece of silverware attached to the body in a position parallel to the ground.

There are two possible explanations. The first, which I doubt, is that the children have swallowed powerful NdFeB (neodymium) magnets.

The second is more prosaic, but much more likely. The "sticky" items are simply being balanced on the kids' bodies, aided by a bit of sweat. Here is a video of a similar claim by another Serb family that looks completely unimpressive. It was debunked by Benjamin Radford back in February, but apparently Ms. Gec was too lazy to do a web search.

And - no surprise - my local paper, the Waterloo Region Record decided to run this article in a prominent position on page F10. That's par for the course for the Record.

Recursivity's Bad Journalism award of the month goes to Ms. Gec and her credulous editors at the AP, with honorable mention to the Record for reprinting it.
Posted by Jeffrey Shallit at 5:30 AM 5 comments:

We haven't had a moose post here for quite a while, but this story definitely makes up for that.
Posted by Jeffrey Shallit at 9:51 AM 4 comments:

Here's an interview with Sherry Turkle, originally released back in April, but replayed yesterday.

For me, here was the most interesting exchange:

Nora Young: "So if we imagine a future where we have robotic companions, the way we now have Roomba vacuum cleaners and Furbies, what's the problem with transferring our idea of companionship to things that aren't actually alive, what's at risk of us losing?"

Now, I understand that an interview like this is necessarily shallow, and I haven't read Turkle's latest book on the subject. But still, this interview seems to suggest a real misunderstanding on Turkle's part.

Yes, when we interact with technology that mimics living creatures, we run the risk of having an overly-optimistic mental model about how much the technology "understands" us. That's the lesson of ELIZA. But in terms of "companionship", many of our companions fail to understand us, in exactly the same way.

When you tell your troubles to your dog, how much do you think your dog understands? A little bit, obviously -- a dog can pick up on your mood and react appropriately. But it seems unlikely a dog will "understand" the details that your best friend just died of AIDS, or that your latest book got a bad review, or that your spouse just walked out on you. Nevertheless, a dog can be a great companion. Why is a living dog a legitimate companion, and a robot dog not?

Even when we interact with other people, they will often listen and express sympathy (and we will happily receive their sympathy and feel comforted by it) without really understanding. As children, we had our crises that were beyond our parents' understanding. And now, as a parent, my children have emotional lives that are largely hidden from me. Yet we can comfort each other, and be good companions, without the deep understanding that Turkle seems to think is required.

Turkle seems to have a mental model of "understanding" that is too black-and-white. Just as, in the famous words of McCarthy and Dennett, a thermostat can be said to have "beliefs", so too can animals and robots have "understanding" of our experiences and needs. Here, by "understanding", I mean that animals, young children, and robots have limited models of us that suffice to provide the appropriate responses to comfort us. A dog can come and lick your face or curl up with you. A child can come sit in your lap. A robot can commiserate by asking what's wrong, or saying it's sorry to hear about our troubles, or even make the right facial expression.

I think it's foolish to obsess about what such a robot "understands". For, after all, we can do the same thing with dogs and young children. How much do they "really" understand of our troubles? Less than an adult human, probably, but the experience is not necessarily worthless despite this lack of understanding.

When Chuck paints a face on a volleyball and makes it his companion in the movie Cast Away, nobody stands up and says, "You idiot! That's just a ball with a dumb face on it." We don't say that, because we understand what loneliness is like and the value of companionship. When Wilson falls overboard later in the movie, we understand why Chuck is so devastated.

I know the value of human conversation, but I still think you can have a conversation with a robot. As I said, I admit there's a danger in overestimating how much a robot understands about us. But children who have grown up with technology have a better understanding of the limitations than those adults who were fooled by ELIZA decades ago. They're not going to be fooled in the same way. Already, as Turkle points out, they've constructed a new category for things like Furby, which is "alive enough". And furthermore, the technology will improve, so that future robots will have better and better models of what humans are like. As they do so, they will become better companions, and questions about whether they "really" understand will simply seem ... quaint.
Posted by Jeffrey Shallit at 12:21 PM 7 comments:

A Stupid and Violent Antisemite

While playing chess at FICS, I received the following message:

HUNriderrr tells you: if u r a jew--so i guess-- then tell your disgusting israel government NOT TO DEAL with turkey..ok???...othherwise we w will #$%& all jews in world       (punctuation marks in original)

The confused mind of the antisemite is sometimes hard to fathom.

There's good news and bad news on the 9/11 denier front.

The good news is that Jonathan Kay has a new book, Among the Truthers, containing a perceptive analysis of the commonalities among 9/11 "Truthers", Obama "birthers", and other fringe conspiracists.

The bad news is that the 9/11 deniers are soon to host yet another laughable truther meeting, which they pompously call the Toronto Hearings, September 8-11, at Ryerson. Here's an article in the Canadian Press that mentions it.

Many of the usual Canadian 9/11 crowd will be there, including Michael Keefer, Graeme MacQueen, and Adnan Zuberi.

I hope some of our local skeptics can attend and report on it.
Posted by Jeffrey Shallit at 2:27 PM 12 comments: