Why Are There so Few Famous Dutch Composers?

But I can't name a single Dutch composer.

Here's Wikipedia's list, and I'll be damned if there's a single name I recognize.

It's strange, because there are so many famous Dutch people in other walks of life: scientists (Leeuwenhoek, Huygens, de Waal,...), mathematicians (de Bruijn, Lenstra,...), artists (Rembrandt, Hals, Vermeer,...), and so forth.

Where are all the great Dutch composers hiding? Or am I just that ignorant?

From longtime reader D. S. comes this story about the UN encouraging the production of moose milk.

Moose cheese is already produced in small amounts in Sweden. It's my dream to try that someday.

Posted by Jeffrey Shallit at 1:21 PM No comments:

Stephen Woodworth, our local Conservative MP, is back with a new motion about the definition of "human being". He's also published this bizarre allegory that he thinks explains why.

It explains a lot. The engineer in his allegory doesn't like balloons. Stephen Woodworth doesn't like abortion.

The engineer in his allegory can't convince anyone to outlaw balloons. (Maybe that's because, at least in the allegory, not a single argument against balloons was offered.) So he tries an end-run around the issue by suggesting a bogus study of "aviation principles".

Then, despite his irrational hatred of balloons, the engineer is surprised that people see through his ploy and "accuse the aviation engineer of being a ballooning-hater whose only motive was to destroy the ballooning industry". Well, in the allegory, that was true, wasn't it? In the first paragraph, we learned that "He actively spoke and wrote against ballooning, penning letters to the editor and articles in professional journals to express this opposition to ballooning." So these accusations are perfectly justified, aren't they?

When I was a child, I had this issue of My Weekly Reader on my bulletin board for many years. 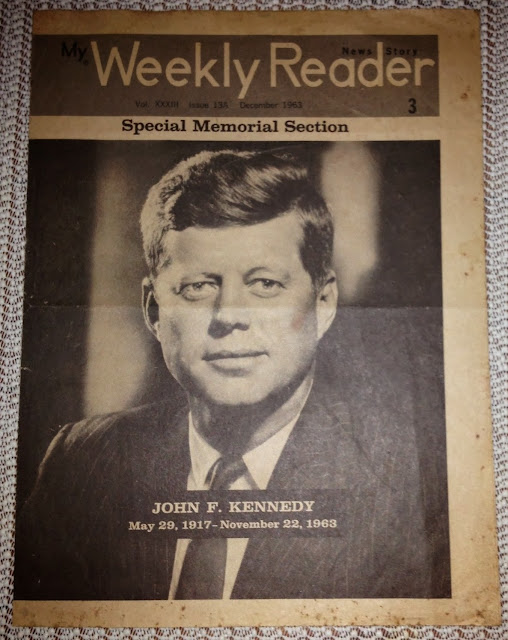 Posted by Jeffrey Shallit at 11:45 AM No comments:

There are so many stories of people in government behaving badly lately, it's hard to know what to pick out. Here are just a few:
Posted by Jeffrey Shallit at 9:11 AM 5 comments:

Friday Not Quite A Moose Blogging

Here's a video of an elk on a trampoline. Not quite a moose, but close.

Posted by Jeffrey Shallit at 4:30 AM No comments:

Good news from Utah: a federal court has struck down the Bureau of Land Management's insane plan to designate over 4000 miles of Utah trails as suitable for off-road vehicle travel. Unrestricted ORV use tends to destroy streams and and soil and plants. The BLM's plan would have destroyed some beautiful wilderness areas. The decision will likely be a precedent for overturning similar plans elsewhere.
Posted by Jeffrey Shallit at 2:49 PM No comments:

Hell Would Be Having to Listen to Francis Spufford

Some atheists are really boring, such as R. Joseph Hoffmann. But I've got to admit, I'd much rather have dinner with Dr. Hoffmann than Francis Spufford. Spufford, a Christian, an author, and a teacher of creative writing at Goldsmiths College, makes the history of NASCAR seem fascinating by comparison.

Take this Spufford piece, for example. It just rambles on and on, with paragraphs the size of the Himalayas, saying not very much at all, and doing so in the most supercilious and insufferable manner imaginable. This man actually teaches creative writing? Students of Spufford: run, don't walk, to the nearest exit, and learn writing from someone who can write, not someone who uses the phrase "bizarre category error" twice in the same essay. (Even using "category error" once by itself merits a big horselaugh -- R. Joseph Hoffmann is fond of it, too.)

Spufford starts with a healthy dollop of religious persecution complex; he thinks that being a Christian means there will be atheist "voices ... getting louder and louder" and "shouting right in ... [the] ear" of his daughter, telling her she's wrong. Funny, the only voices I hear shouting when I walk around my town are drunk people, insane people, and fundamentalist preachers. I'd really like to visit Spufford's town to see all these shouting atheists; it must make quite a show.

Spufford claims that "belief ... involves the most uncompromising attention to the nature of things of which you are capable." Really? You mean so uncompromising that you don't actually address the fundamental question of whether your beliefs are true or not? Spufford seems to think that his religious beliefs are justified because (a) they're normal (b) they're part of his imagination and (c) they make him feel good. Most of us have grown up enough to realize those aren't particularly compelling reasons.

He then spends a quarter of his essay attacking a London bus ad which said, "There’s probably no God. Now stop worrying and enjoy your life." Spufford apparently thinks the ad means that "enjoyment" is the sole goal of life and that the ad will be poor consolation for people with lives stricken with poverty, disease, or personal tragedies. But that's not what it means and not whom the ad is directed to, as anyone with connected brain cells can figure out. Hey, why not attack "Coke - Life begins here" instead? How limited must a man's Weltanschauung be if it has to commence with a carbonated beverage!

Like many North American atheists, I used to be a Christian. I ceased to become a Christian because the fundamental claims of Christianity -- which involve a unique all-powerful god, who is actually three different gods, that raped a woman to conceive a son, which is one of those three gods, who then died (but did not really die) to remove sin from me which is only sin because he decided it would be so, and which is not my sin, but rather the sin of a nonexistent ancient ancestor, and I must believe this or be consigned to a fiery hell, and he knows the future and hence everything I will do (but I also have free will) and he also loves me and cares about me, but if I put my hoohah in someone else's doohickey, I'm toast -- are simply not believable to anyone who spends 5 minutes thinking about it. Only someone who was propagandized from birth that this load of puerile nonsense is plausible could fall for it. For me it makes no logical sense, but also no emotional sense. A grotesque fable of one person's sin "redeemed" (whatever that is supposed to mean) by the execution of another, probably mentally deranged, has no emotional resonance at all for me.

What I find more interesting are the reactions to Spufford's piece in Salon. Thirty years ago, the comments would have been largely supportive. Those pesky atheists, they're juvenile, and stupid, and they miss the big picture... how right you are! Now, though, there's a sea change. The vast majority of comments are negative, pointing out the deficiencies in Spufford's reasoning (if one can call it that) and writing style. Now that is progress.

I really think that "Spufford" should be a verb: "to bore with ponderous incoherence". We went to the lecture, but the guy was just spuffording, so we left early. Now, where's that history of NASCAR?