I'm Really Glad Steve Fuller is on Their Side

If you are having trouble sleeping, this video of Steve Fuller prattling on and on and on while not saying very much at all is just the thing for you.

Fuller thinks that what the intelligent design movement really needs is another creationist geology book. And he thinks that Dembski is updating Shannon on information theory. (That'll be news to everyone who actually does information theory.) I'm really glad that Fuller is the intelligent design movement's favorite philosopher. Imagine the damage he could do if he were on the side of science and reason!

"Says You" in Syracuse

I finally got to attend a taping of one of my favorite radio shows, "Says You", in Syracuse, New York. That's host Richard Sher at the top, and at the bottom you see panelists Tony Kahn, Lenore Shannon, and Tony Horwitz conferring on a question. The other panelists that night were Carolyn Faye Fox, Arnie Reisman, and Paula Lyons. 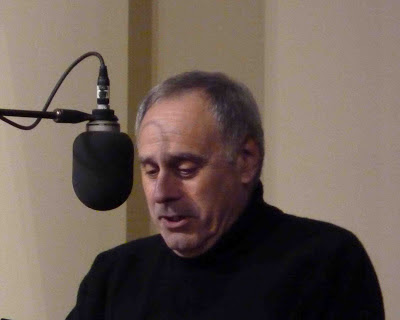 Although the show is one of my favorites, I have to admit it was not as good or funny as shows in the past. They sometimes play old shows or highlights from old shows, and you can hear the difference: they used to have lightning-fast wordplay and deductions, and lately they've been slipping a bit. Maybe they need some new blood: some younger panelists. 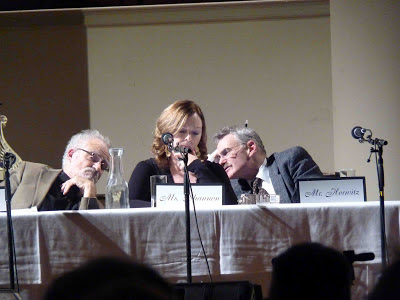 By the way, if you want to listen to the show, you either have to pay for it, or listen to it live on Saturday or Sunday on your local NPR station, or over the internet.

Do you have some favorite radio shows that you listen to over the internet? If so, give links in the comments.

Posted by Jeffrey Shallit at 9:40 AM 4 comments:

I Definitely Do Not Recommend This "Book" About Me

This is the usual scam where someone advertises a book that consists of nothing but reprints from freely-available web pages, and then prints a book on demand if someone is stupid enough to buy it.

The same "author" has written 6000 other books.

Monckton Spoke at U. Western Ontario ?!?

I don't know how I missed this.

Believe it or not, the Department of Applied Mathematics at University of Western Ontario, located in London, Ontario, invited the loony Christopher Monckton to give a prestigious invited lecture, the Nerenberg lecture, last March. Previous speakers included Roger Penrose.

In addition to being a pompous twit, Monckton is famous for global warming denial and, in his latest schtick, claiming that Obama's birth certificate is fraudulent.

My source tells me that the invitation to Monckton came from Chris Essex, professor of the department, and another global warming denier. Most of the Department boycotted the talk, I was told.

If anybody attended the talk, I would like to hear about it. This is really a disgrace.

I made chili colorado from this recipe tonight. It took about three hours. The sauce was too liquidy for my tastes; next time I will add some flour to thicken it. Do you have a better recipe?
Posted by Jeffrey Shallit at 7:14 PM 7 comments:

Thanks to the hard work of Jon Borwein, Yann Bugeaud, Michael Coons, and the late Alf van der Poorten, there is now an online archive of the works of the number theorist Kurt Mahler. This is a great resource for mathematicians and more initiatives like this are needed.

In 2009, despite protests from faculty, the University of Waterloo opened a campus in Dubai.

Now, just three years later, it is closing. Big surprise there. Administrators were warned that it was unlikely to succeed, and if I remember correctly, our School of Computer Science voted against it. There was a lot of opposition to setting up a campus in a place with little protection for free speech and a free press, as well as violations of women's rights and gay rights.

By the way, the article in the Record I pointed to above is the typical shoddy job done by local reporter Liz Monteiro. There is nothing about how much this failure has cost the University (if anything), nor any interview with anyone originally opposed to the campus, nor any investigation of why the campus was set up to begin with. This is not good journalism.

A few buttons from our family collection. 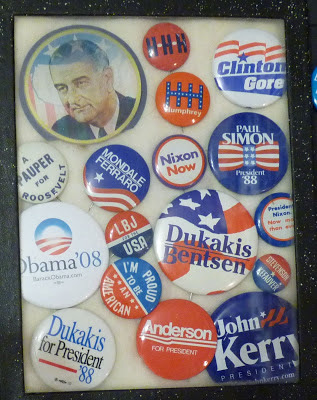 Posted by Jeffrey Shallit at 4:26 AM 3 comments:

Believe it or not, one of the most important crossings between Canada and the United States -- Ambassador Bridge -- is privately owned by a guy named Matty Moroun. For years people have wanted another bridge, because the existing one can't support the traffic. Canada has even offered to pick up all the cost of the new bridge, so it will be essentially free for the US.

Moroun can't stand the competition, and he's tried in every possible way to block the new bridge. Who cares if the bridge will benefit millions of people on both sides of the border? The only thing that matters is Moroun's profit.

He spent $33 million to back a statewide ballot measure intended to block the bridge, but lost badly, 60% to 40%.

Maybe now this important bridge will get built.

Most Americans are Not Crazy

It was a good election. Serial liar Romney, a man completely devoid of honesty, principles, and integrity, was convincingly defeated. I wasn't completely happy with Obama, but he was so much better than the alternative.

Nearly all the crazies lost: Allen West, Connie Mack, Todd Akin, Joe Walsh, and Richard Mourdock. Unfortunately it looks like we are still stuck with Michele Bachmann. And Judge Roy Moore won election in Alabama. Alabama secures its reputation as the worst place to live in the US.

Elizabeth Warren, who was the subject of nasty attacks about her native American heritage, easily defeated Scott Brown. Brown was not nearly as extremist as depicted by Democrats, but he was in the wrong state. He would have been a decent candidate for a state like Indiana or Pennsylvania, but not Massachusetts.

Two states legalized marijuana. This may be the start of a sane drug policy.

The mathematical illiterates who were skeptical of Nate Silver were proven wildly wrong. Silver's predictions were basically completely correct.

As predicted, crazies like Doug Groothuis are apoplectic. Groothuis raves as follows: "American [sic] does not know how to think, has no moral or political principles worth having, is manipulated by images and slogans, does not fear the idol of the State does not give a rip about unborn children; we will be taxes [sic] for their murders, does not believe in its own God-given greatness."

The dishonest Charles Krauthammer was raving about the "nationalization" of health care under Obama. Krauthammer is a liar. If you want to see nationalized health care, go to Britain. Obamacare isn't even close to "nationalization"; it's a timid initiative that maintains the status quo in almost every health care aspect except insurance. Bush's prescription drug benefit was a much bigger change.

Americans proved that the majority was not racist and was not fooled by pandering. That's a very good sign.

My Talk at the APL@50 Conference

Yesterday York University hosted a 1-day conference entitled "APL@50", to celebrate the 50th anniversary of the publication of Kenneth Iverson's book, A Programming Language. This book, and the subsequent implementation of APL, eventually won Iverson the Turing award in 1979.

Here are my slides for the talk.

I said a lot of things that were not on the slides. In particular: "More foolish things have been said about APL than any other programming language, and Edsger Dijkstra was one of the biggest offenders."

In addition to the talks, there were some really nice displays from the collection of the York University Computer Museum. For example there was an IBM 5100 APL machine (one that I spend several years programming as an undergraduate), and an MCM APL machine.

We also saw a short film by Catherine Lathwell, who is working on a full-fledged documentary about APL.

At a panel we were asked to summarize what APL meant to us. I said something like the following: APL taught us that a good notation is half the battle. Computing is ultimately about insight, and a system that encourages experimentation and variation is one that can be used to treat mathematics almost as if it were an experimental science.

Thanks to Zbigniew Stachniak and Catherine Lathwell for organizing this.

Posted by Jeffrey Shallit at 7:44 AM 3 comments: