"But mathematicians recognize that the existence of an actually infinite number of things leads to self-contradictions. For example, what is infinity minus infinity? Mathematically, you get self-contradictory answers."

It's hard to know what Craig really means here, because it is so confused. Mathematicians routinely study "an actually infinite number of things", such as the natural numbers, the real numbers, and the complex numbers. No contradictions are involved.

But maybe Craig is talking about an actual infinity of things in nature. Then he shouldn't be talking about mathematicians, but physicists. Even here, physicists do discuss an actual physical infinity - without contradictions - such as Malament-Hogarth spacetime. Examples like Hilbert's hotel, that are often proffered as insoluble paradoxes, only show that infinity needs to be treated with care and may result in scenarios that seem counter-intuitive. But so does relativity.

Addendum As I listen to more of the debate, it seems Craig retreats a bit from his claim about mathematics. He still seems to think that an actual infinite number of objects in the universe creates "contradictions", but he doesn't say explicitly what those contradictions are.

Nobody - Even Creationists - Seems to Know How To Calculate Dembski's "CSI"

Back in 2001, when I was on sabbatical in Tucson, Arizona, I decided to spend some time trying to understand Dembski's "complex specified information" (CSI) to see if there was anything to it. The result was my long paper with Elsberry, where we concluded that CSI was a hopeless, incoherent mess that didn't have the properties Dembski claimed. A shorter version of the paper has recently appeared in Synthese.

Now, over on Uncommon Descent, there is an amusing thread which demonstrates our conclusion. Nobody, not even the creationists, can seemingly agree on the most simple assertions about CSI. That's because it's a hopeless, incoherent mess.
Posted by Jeffrey Shallit at 4:24 PM 18 comments:

This wins my award for the "No Smoking Sign Least Likely to Convince Anyone Not to Smoke". Spotted in the Surrogate's Court Building, 4th Floor, at 31 Chambers Street, NYC. At the time someone was happily smoking in one of the stalls. 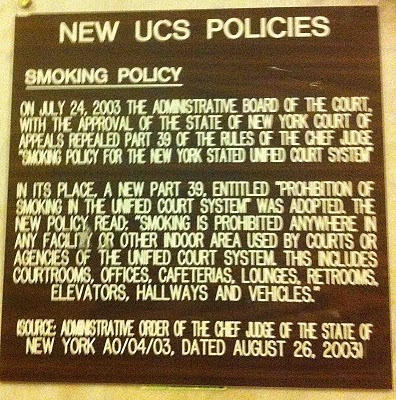 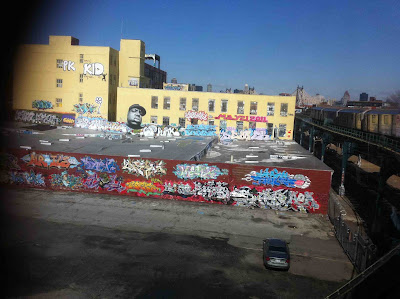 This is just a small portion of an amazing collection of graffiti, spotted in an American city. For points, identify

the subway from which you can see it, and

the name of the location.
Posted by Jeffrey Shallit at 3:49 PM 12 comments:

Conway, Diaconis, Rivest I've Heard Of - But Who's That Fourth Guy?

In this reminiscence about the late Martin Gardner, Donald Knuth points out that Gardner had correspondence with some young mathematicians who later became famous: John Conway, Persi Diaconis, Ron Rivest, and some fourth guy no one's ever heard of.

Well, it's nice to be mentioned in that famous company.
Posted by Jeffrey Shallit at 9:37 AM 5 comments: 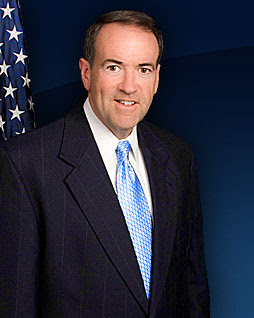 Take a good look.
Posted by Jeffrey Shallit at 4:00 AM 18 comments: