David Warren is an Ignoramus

What happens when a newspaper hires an ignoramus as a columnist?

You get this kind of drivel, which has been deftly taken apart by media culpa.

David Warren seems to have attended the Denyse O'Leary school of ignorance.

One of the best moments in Annie Hall occurs when Alvy Singer (Woody Allen) is standing in line at the theater with Annie Hall (Diane Keaton), listening to a guy pontificate behind him. When the guy mentions Marshall McLuhan, Singer pulls out McLuhan from behind a poster, who then proceeds to say "You know nothing of my work!"

Singer then says, "Boy, if life were only like this!"

Well, perhaps what just happened to me is not up to that standard, but here goes anyway:

Over at Uncommon Descent, writer "DonaldM" uses the satiric experiment of physicist Alan Sokal to argue against "dogmatic Darwinism" and for "the sunshine of Truth".

I wrote to Alan Sokal and asked him what he thought of DonaldM's ramblings. Here are excerpts from his e-mail to me (ellipses, as usual, denote omissions):

Many thanks for drawing my attention to that strange blog item... I don't really understand the logic of how that ID guy is purporting to use me!

I mean, I looked at Paul Greenberg's article in the Jewish World Review that he cites http://www.jewishworldreview.com/cols/greenberg070610.php3?printer_friendly and it seems to be a straightforward piece supporting my contention that there is such a thing as objective reality (though he didn't get quite correct his purported quote from me). But then the ID guy seems to overlook the obvious irony in the paragraph from Greenberg that he quotes, and takes it literally -- or else he just drops the subject there, says that "All this reminds me" of something else that is vaguely related, and goes on with his own pet story.

Now, that story makes a valid point, namely that how one interprets evidence is affected (though not determined) by the preconceptions one comes with. But if we are having a contest about who is more open to having his or her preconceptions be refuted by inconvenient evidence, then I would have to say that -- though no one is perfect -- scientists win hands down over the devotees of sacred texts. (I know, I know, they will respond in a chorus: ID is not religion, and our support for ID does not arise from any religious commitment but simply from our dispassionate analysis of the scientific evidence. Yeah, right.)


Isn't it great that life is like this!
Posted by Jeffrey Shallit at 10:08 AM 14 comments: 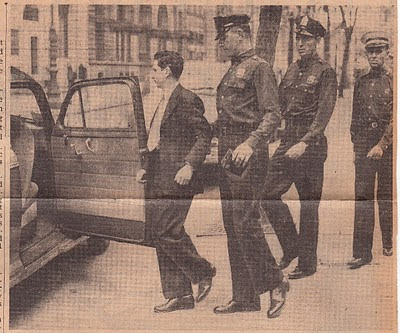 My father died in 1995. I like to think, however, that if he were still alive, he'd still be sticking up for the little guy -- and for the right to photograph without being arrested by overzealous officials.
Posted by Jeffrey Shallit at 8:58 PM 6 comments: