The eminent professor Behe, author of Darwin's Black Box, which was named the 92nd best book of the last century by the geniuses at National Review, is unhappy. I guess he has a lot to be unhappy about, what with his University department posting a disclaimer about his work on their web pages. But no, it's not that his colleagues think his work is junk that is bothering him this time.

This time, it's about something much more sinister. It seems that John McWhorter, a linguist with no biological training that I can detect, recently interviewed Behe on bloggingheads.tv. In the interview, McWhorter gushes that "I just read your book The Edge of Evolution from 2007 and I found it absolutely shattering. I mean, this is a very important book. And yet I sense that from the reputation, or the reception of your book from 10+ years ago, Darwin's Black Box, that it may be hard to get a lot of people to understand why the book is important." Later, he claims that The Edge of Evolution was one of the most important books he's ever read. It seems that McWhorter didn't bother to read or understand the criticism of Behe's claims by actual biologists, such as Dawkins, Coyne, and Miller. Instead, Behe was able to babble without being challenged.

What happened next? Predictably, people who actually know something about evolution and Behe's misrepresentations complained, McWhorter had second thoughts, and the video was removed from bloggingheads.tv. Although I wouldn't have published this gushing, ignorant interview to begin with, I wouldn't have removed it afterwards, either -- it's a useful record of McWhorter's fawning stupidity and Behe's unsupported claims. Luckily, it's been archived.

What interests me more is Behe's reaction to the whole affair. He describes those who complained as "cyber bullies" and "internet mobs". (A bully, in Behe's view, apparently being someone who does not buy his bogus claims, and an "internet mob" is a few people who complained.) He also compares himself to Nikolai Yezhov and his detractors to Joseph Stalin.

Poor Michael Behe. While bloggingheads.tv showed very poor judgment in getting a non-biologist to interview Behe, and even poorer judgment in deleting the interview after posting it, Behe's reaction to the affair is hyperbolic. Behe had an interview deleted; he wasn't murdered in a basement. And the irony is even greater, since Behe posted his complaints on a blog which does not allow any comments!

When you make stupid and unsupported claims, you're going to get criticized -- and sometimes harshly. That's science. Deal with it.

I had this conversation this morning in a Shaw's supermarket:

Me: Can I buy a Charlie Card here?

Me: No, a Chcharrrlie Card.

One Difference Between Canada and the US

When I first moved to Canada in 1990, I was struck by how unfriendly it seemed compared to places in the US that I had lived. For example, if you meet someone in the hallway at an American university, and say, "Hi, how are you?", you will nearly always get a response along the lines of "Fine, how are you?" But not so in Canada. Instead, you will typically get the response "Fine." -- and then the person will walk on, without inquiring about your own health.

For many years I found this astonishingly rude; sometimes I even resorted to mumbling "And yes, I'm fine too, thank you very much for asking" under my breath. Then someone explained to me that in fact it was I who was being rude, since in Canada inquiring about someone's health is considered too intrusive. Instead of rudeness, what I was witnessing was the clash of expectations. Although I understand this on a rational level now, I still continue to find it rude viscerally.

Here's another example: go to any American city, stand on a street corner, open up a map, and look at it. Within 30 seconds, someone will ask you, "Can I help you find something?" or "Do you need any help?" Yet I've done the same experiment over and over again in Toronto, and after 10 minutes still no one volunteered any help. The one time someone did, it was an American tourist! As my wife explained, this is not an example of Canadian rudeness; Canadians simply have a different notion of personal space. They find it rude to approach a stranger and casually offer assistance when none may be needed. Americans find it simple friendliness.

I am struck by this difference now that I've temporarily relocated to the Boston area for my sabbatical. We were standing in Kendall Square looking at the map, and just as the stereotype dictates, within 15 seconds someone asked us if we needed help. Just now we came back from a brief bike ride in a Boston suburb; as my son and I looked at the street map, a woman asked "Can I help you find something?"

For the moment, I'm glad to be living in a place where my cultural expectations match those of my neighbors.
Posted by Jeffrey Shallit at 2:53 PM 24 comments:

US Consulate in Toronto Cuts Back Again

I've lived in Canada since 1990 (not counting our sabbaticals). As an American citizen living in Canada, I occasionally have to consult the American Consulate in Toronto - for example, to renew a passport - and over the past 19 years, the service has gotten steadily worse... and worse.

It used to be you could call and actually reach a human to ask a question - no longer. Now you're stuck with the information provided on the Internet (which is often out of date, incorrect, or loaded with broken links).

It used to be you could show up at the Consulate in person without any advance notice and get your business done. But not any longer. I just got e-mail from the Consulate saying "an appointment will be required for all services at the U.S. Consulate General in Toronto".

The last trip we made to the Consulate to get US passports for our kids took up the whole morning. First, we were forced to go all the way back to our car (parked blocks away) because they would not allow us to take our cell phones in. The final indignity was that they would not even pay to mail the passports to us; we had to go out of the consulate and across the street and provide the Consulate with self-addressed express mail envelopes (a requirement not mentioned anywhere in any of the application forms).

The Consulate General is supposed to represent the interests of US citizens living abroad. At least in Toronto, they're doing a really poor job of it.
Posted by Jeffrey Shallit at 5:49 PM 3 comments: 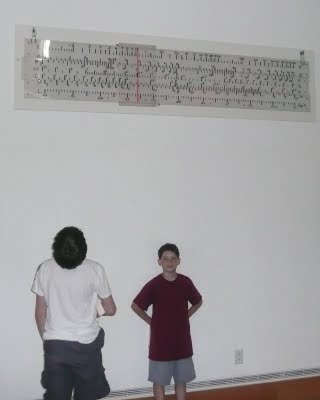 Well, most of the boxes are unpacked, and we're working on getting the kids registered for school. I have an office (sort of) and we've found a local place for bagels. My sabbatical has begun!

I'm looking forward to a year of working on papers and book projects, learning new things, and catching up on work that has been postponed for too long.

Where are we? Well, the picture is a hint. I'll give another hint tomorrow.
Posted by Jeffrey Shallit at 10:44 AM 4 comments: