I Didn't Get Elected President 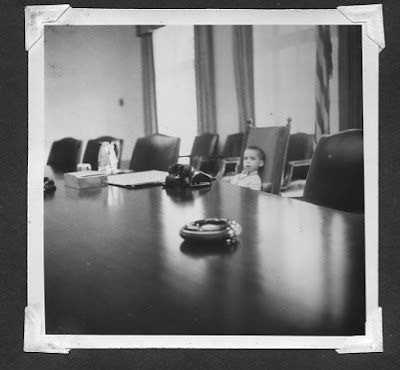 The one really surprising fact about the US presidential election is how few people voted for me.

After all, I have international experience, having lived in Canada since 1990. And I know more about economics than John McCain, and more about geography than Sarah Palin. Why not me?

I've been training for the job since 1963. In the photo, that's me in the White House cabinet room, waiting for the rest of the cabinet to assemble for our meeting. I was only 5 at the time, but they still gave me the seat of honor.

[My father knew Myer Feldman, the deputy special counsel to President Kennedy, because they both grew up in Philadelphia, so we got a special tour of the White House on May 11, 1963. Kennedy was away in Massachusetts meeting with the Prime Minister of Canada, so we didn't get to meet him.]

Posted by Jeffrey Shallit at 7:48 AM 5 comments:

My younger son had some English homework where he was supposed to find all the errors in the given sentence. I see one error, but what's wrong with the moose?
Posted by Jeffrey Shallit at 5:04 PM 5 comments:

My Head Cavorts on Dutch TV

Ionica Smeets of the website Wiskundemeisjes (Math Girls) has written to let me know that a Dutch TV program has featured my paper on optimal coin denominations. Probably only of interest if you are fluent in Dutch, or enjoy seeing my head being animated and doing strange things.
Posted by Jeffrey Shallit at 7:52 AM 2 comments: 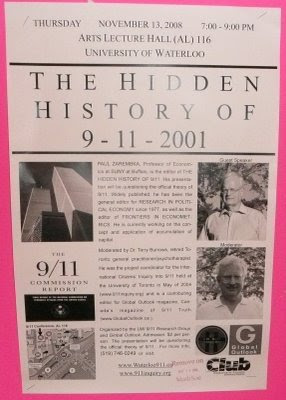 In case you can't read the poster, you can see a better version here. Global Outlook, the group sponsoring the Waterloo event, is also hosting a lecture series at the University of Toronto that looks just chock-full of all sorts of woo, including a bizarre focus on "natural medicine" and "out-of-place artifacts".
Posted by Jeffrey Shallit at 5:36 AM 10 comments:

Blowhard of the Month: Wayne Eyre

There is no subject like evolution to bring out the blowhards, and Wayne Eyre is just the latest. Writing in the National Post, Eyre praises David Berlinski's latest screed, The Devil's Delusion.

Berlinski, as you probably know, is the poseur who somehow managed to get his anti-evolutionary blather published in venues such as Commentary. He was also recenty caught inventing bogus claims about John von Neumann's attitude towards evolution. A reliable source? I don't think so.

Nevertheless, Blowhard of the Month Eyre accepts Berlinski's claims about evolution at face value. If Berlinski says that the theory of evolution "makes little sense", Eyre believes it must be so. Somehow, Berlinski -- a man with no biological training -- knows more than actual biologists. Differential reproductive success coupled with a mechanism for genotypic/phenotypic change means evolution is inevitable. Any beginning biology student understands this. What about it is so difficult for Eyre?

If Berlinski says the theory of evolution "is supported by little evidence", it must be so. Never mind the painstaking case assembled by Darwin that convinced biologists a hundred years ago. Never mind the mounds and mounds of evidence assembled since then -- if Eyre has ever cracked open a biology textbook or Endler's Natural Selection in the Wild, I would be amazed. No: philosophy Ph. D. David Berlinski has said it, and so it must be true.

Eyre even resorts to the favorite ploy of the blowhard: if all the experts say I am wrong, that is proof I am right.

The fact that the National Post would publish this idea-free dreck is yet more proof that intellectual conservatism is dead.
Posted by Jeffrey Shallit at 7:15 AM 3 comments:

Crackpots Advance Yet Another Obama Smear

This election has shown without a doubt that the American Right is totally bereft of any sensible ideas. So far they've produced:

and many other similar claims that are jaw-dropping in their utter insanity. One McCain supporter even refused to give Halloween candy to the children of parents who supported Obama.

But this is one of the craziest yet. Now the claim is that Obama is secretly using hypnosis techniques to deceive the public. And what's the evidence? It's that Obama uses the hackneyed phrase, "As I stand here before you" in his speeches. Well, then I guess that McCain supporter Joe Lieberman must be using the same technique. After all, it was pioneered by baseball great Brooks Robinson, who apparently developed it to hypnotize pitchers.

It used to be that Republicans had some legitimate criticisms of the Dems. Now all they have is insanity.
Posted by Jeffrey Shallit at 3:14 AM 4 comments: 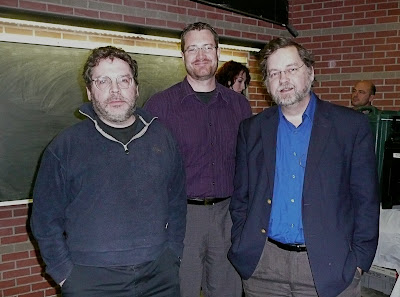 On the left, yours truly. In the center, T. Ryan Gregory of Genomicron. On the right, the world's most famous science blogger, P. Z. Myers of Pharyngula. We were all in Guelph for P. Z.'s talk sponsored by CFI and the University of Guelph Skeptics.

The talk was well-attended, as P. Z. and his daughter discussed a variety of different subjects, including science education, the upcoming election, and strategies for fighting the foolishness of creationism and intelligent design.

The highlight for me, however, had to be the fellow who during question period insisted that there had to be something outside scientific inquiry, and gave as his prime example (and no, I am not making this up) the 2004 World Series victory by the Boston Red Sox. He claimed that the Sox's improbable finish, including victory during a total lunar eclipse, was proof of supernatural intervention. The majority of the audience laughed, because I suspect they know what I know: that the 2008 World Series Victory by the Phillies is the ultimate, unquestionable proof of a deity.
Posted by Jeffrey Shallit at 8:13 PM 13 comments: