Over at Uncommon Descent, Denyse O'Leary, the world's worst journalist™, gives us a list of her favorite science books --- in her usual barely literate style. (Note to Denyse: the plural of "coo" is not "coo's".)

No surprise, three of them aren't written by scientists: Darwin on Trial, Signature in the Cell, and Alfred Russel Wallace's Theory of Intelligent Evolution. Of the other two, one was written by a very mediocre scientist who made basic mistakes in previous books, and the other by a man whose bogus claims were repudiated by his own department. In Denyse's topsy-turvy world, actual scientists can be dismissed as "mooches and tax burdens", or "British aristocrats".

The late Martin Gardner studied this kind of crankery and knew how to recognize it. A scientific crank, Gardner said, "has strong compulsions to focus his attacks on the greatest scientists and the best-established theories." It is not possible to reason with this kind of idiocy -- ridicule is the best response.

Actually, Denyse's list would be a good start on a list of the Worst Science Books. Do you have any more nominations? I'll start with Judith Hooper's Of Moths and Men, Arthur Koestler's The Case of the Midwife Toad, and anything by Jeremy Rifkin.

Mr. Jefferson and the Giant Moose 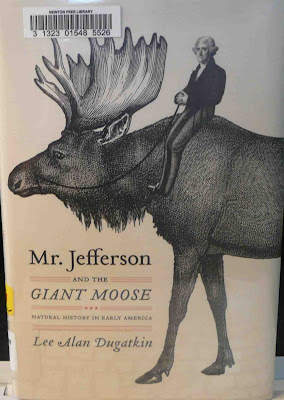 I recently read a fun little book, Mr. Jefferson and the Giant Moose, by Lee Alan Dugatkin. It's the story of a little-known episode in American history -- how Jefferson tried to combat the bogus claims of French naturalist Georges-Louis Leclerc, Comte de Buffon, that North American biota was "degenerate" compared to European biota.

Jefferson was worried that if such claims became accepted knowledge, then the US's reputation would suffer. Who would want to conduct trade with "degenerate" humans, or buy "degenerate" agricultural products?

In part, Buffon's claims were responsible for Jefferson's magnum opus, Notes on the State of Virginia, the most important American book published before 1800. Writing Notes involved correspondence with luminaries such as James Madison. Dugatkin quotes from a 1786 letter from Madison to Jefferson, where they discuss the fine points of weasel biology, including measuring the "width of the ears horizontally" and the "distance between the anus and the vulva".

But Jefferson had other ideas for convincing Buffon. As the book's title suggests, Jefferson's most concerted effort in terms of hands-on evidence was to procure a very large, dead, stuffed American moose - antlers and all - to hand Buffon personally in Paris, in effect saying "see".

You can't help but love a book that has sentences like "The first pre-moose incident occurred just before Jefferson was to sail off to his ministerial post in France" and "The second pre-moose instance -- wherein Jefferson encountered in Buffon a man who seemed to refuse to budge, even in the face of physical evidence -- revolved around the "mammoth" discussed in Notes on the State of Virginia."

I recommend it to anyone interested in the crucial role of ungulates in American history.
Posted by Jeffrey Shallit at 10:38 AM 4 comments:

Mirko Petricevic, the religion reporter for the Kitchener-Waterloo Record, is at it again.

I previously criticized his coverage of a local creationist group. I pointed out that Petricevic -- unlike a good reporter -- never asks any hard questions of believers. Instead, his "reporting" is mostly just taking dictation.

Now he's got an article about the local Christian Science church, and he's employing exactly the same modus operandi: local believers are allowed to prattle on, and not a single skeptical word in the entire article.

Reading it, you would never know that there is no good evidence that prayer works to heal people of diseases. Nor would you know that Christian Science practitioners have been implicated in dozens of cases of medical neglect, where simple and safe treatment could have saved lives.

This is not just shoddy journalism, it's morally culpable.
Posted by Jeffrey Shallit at 9:31 AM 1 comment:

I'm Sorry to Have Missed This

Reader Paul C. A. points out that I was too late to attend the International Remote Viewing Association's 2010 conference. Too bad, I would have liked to see so many woomeisters in one room.

Just think, for only $436 I could have heard

* Robert Jahn, formerly of PEAR, a parapsychology lab associated with Princeton that embarrassed them for years until it was finally disbanded in 2006;

* Noreen Renier, a self-proclaimed psychic whose attempts at solving crimes have been extensively debunked;

* Courtney Brown, a political scientist at Emory University who, according to Michael Shermer, is not allowed to mention his affiliation with Emory when discussing remote viewing. Did I mention that he was a "yogic flyer"?

Oh, the fun I could have had! For example, in the description of Jahn's talk, he says, "repeated applications proved to diminish the yield, suggesting that disproportionate focus on the analytical components of the perception, rather than on the phenomenal gestalt, can result in obscuring the essence of the phenomenon and that the subjective quality of these experiences is more effectively enhanced when their inherent uncertainties are both acknowledged and emphasized."

Translation: we can't figure out why our discovery of tiny psi effects disappear when we do more trials.
Posted by Jeffrey Shallit at 8:17 AM 3 comments:

Yet Another Literary Quiz 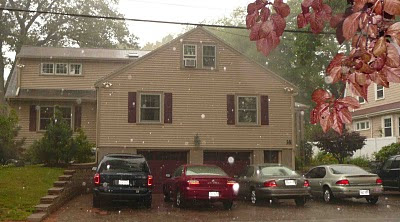 What American polymath, professor, science and fiction writer lived in this house in Newton, Massachusetts from 1956 to 1970? Hint: he has an asteroid and a crater on Mars named after him.

Sorry about the photo quality - it was pouring at the time.
Posted by Jeffrey Shallit at 8:36 PM 8 comments: 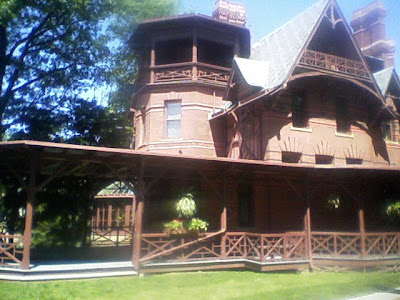 This house in New England was owned by one of America's most celebrated writers. One of his lesser-known achievements was a long attack on a home-grown American religion. This writer wrote most of his celebrated works in this house.

I am fascinated by cranks and crank mathematics, and there's a lot of them/it out there. Here's a new "proof" of Fermat's last theorem I was sent yesterday. There is only a small amount of entertainment value in this one, with phrases such as "only one of those cofactors is organically entered into the structure of the pair of conjugate variables". Much better is the book The Life-Romance of an Algebraist by George Winslow Pierce.
Posted by Jeffrey Shallit at 2:34 PM 2 comments:

The fine-structure constant α is a fundamental constant in physics, and is currently estimated to be approximately .0072973525376.

The physicist Arthur Eddington, who became rather eccentric and believed he could compute the number of protons in the universe accurately, thought it was equal to exactly 1/137, but our current estimate gives something closer to 1/137.03599967899.

I just received the following letter:

Because our library does not have access to the article, it should be best that you send me a copy via email.

I really appreciate your worthless help!


Now that's the way to ask for a reprint!
Posted by Jeffrey Shallit at 7:09 PM 12 comments:

My great-great-great-great-grandfather was John Alexander (1738-1799), a minister in the Church of England and a Loyalist during the Revolutionary War. (Although I'd have preferred a freethinker and a revolutionary, we don't get to choose our ancestors.) Here is a copy of his will, as reproduced in Volume 2, No. 4 (October 1901) of J. R. B. Hathaway's North Carolina Historical and Genealogical Register. The will is dated April 4 1795 and was probated in the August 1799 term of the court of Bertie County, North Carolina.

"For as much as the last scene of life seems hastening on, and the curtain ready to fall," I think it prudent, before I make my final exit off the stage, whereon I have some time acted, to dispose of the few trifles fortune has bestowed me, in manner following to-wit:

Imprimis. I Give and bequeath to my two Daughters, Martha and Rachel, all and every part of my property whatever, to be equally divided between them, and to their lawful heirs forever. On the demise of either, before impowered to make a will, the surviving sister inherits the whole and should both decease, before the laws capacitate to will, then, my remaining property to be wholly converted to Educating the poor children within the counties of Hertford and Bertie; under such regulations as my Executors shall think fit. My body I bequeath to the earth, whence it originated, My Soul Immortal and unalloyed to dust, I commend to the Father of Mercies.

The manly, masculine Voice of Orthodoxy, is no longer heard in our land. Far, therefore, from my Grave be the senseless Rant of Whining Fanaticism; her hated and successful rival --- Cant and Grimace dishonour the dead, as well as Disgrace the living. Let the monitor within, who never Deceives, alone pronounce my Funeral Oration; while some Friendly hand Deposits my poor remains Close by the ashes of my beloved Daughter Elizabeth, with whom I trust to share a happy Eternity.

And of this my last Will and Testament, I constitute and appoint Capt'n George West, George Outlaw, Esq., and Mr. Edward Outlaw, my Executors, On whose Probity, Honor, and Disinterested Friendship, I entirely rely for the faithful Discharge of the trust I repose in them. Beseeching them, as they would approve themselves to him who is the Father of the Fatherless, to use all possible means of Inspiring my children with a love of Virtue and an abhorrence of Vice, Restraining them from all plans and persons Dangerous to their Virtue or Innocency --- Giving them an Education to their rank in life suitable and becoming. Let their books and their needles be their principal companions and Employ. I could wish the laws enable me to do more for my wretched and unfortunate slaves than that of recommending them to lenity and mild treatment.


The "manly, masculine Voice of Orthodoxy" is the Church of England; the "senseless Rant of Whining Fanaticism" is either the Episcopalian Church or the Baptist Church.

I don't know why, if he found his slaves "wretched and unfortunate", he didn't just free them. But perhaps it was just so far beyond the social norm that he didn't feel it possible to do so.
Posted by Jeffrey Shallit at 5:09 AM 4 comments: 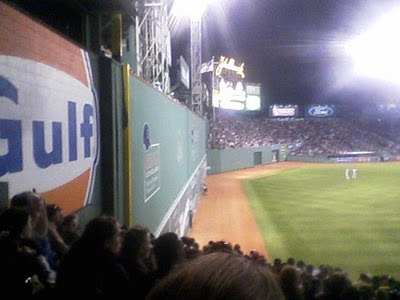 I would guess this is the most famous wall in professional sports. What do you think?
Posted by Jeffrey Shallit at 11:51 AM 6 comments:

Harlan Coben is a pretty good mystery writer. I don't like his Myron Bolitar novels, but that's because I don't like the main character, a sports agent, at all. But some of his other books are top-notch: Tell No One, which was made into a movie by the French director Guillaume Canet (Ne le dis à personne) is excellent, as are many of his other stand-alone novels. Each stand-alone has a similar theme: something in the distant past of a character's life is eventually revealed, with strong repercussions in the present day, changing what many of the characters thought they knew.

His latest book, Caught, is about the disappearance of a high-school lacrosse player, and, while it starts slowly, you get the trademark Coben reversals in the last 50 pages. It's a good summer read.

Something was niggling at the back of Wendy's brain. It was there, just out of sight, but she couldn't quite get to it.

Is there anything more infuriating in mystery writing than this cliché? The reader learns that something is triggered at the back of the detective's mind, and it's like a great big sign reading, "IF YOU WANT TO FIGURE IT OUT, THIS IS AN IMPORTANT CLUE."

What are some other mystery novel clichés that turn you off?
Posted by Jeffrey Shallit at 12:56 PM 11 comments: