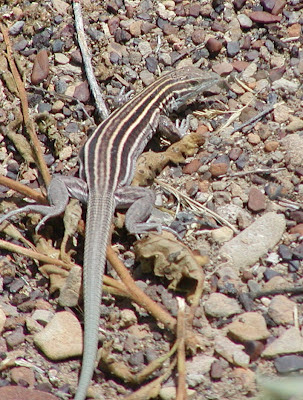 Here's a picture I took of the Plateau Striped Whiptail ( Cnemidophorus velox), a lizard I saw in Chaco Canyon, northwest New Mexico.

Plateau Striped Whiptails are unusual because, like several whiptail species, they are primarily parthenogenetic; that is, females usually reproduce without the assistance of males.

Parthenogenesis in Plateau Striped Whiptails was first noted by biologist T. Paul Maslin [Science, 132 (1962), 212-213], who collected these lizards and found 102 females and only 2 males, both juvenile. Because of the presence of 2 males, Maslin cautioned that parthenogenesis was not conclusively established. Later, however [Copeia (1971), 156-158] Maslin reported raising whiptails in captivity without the presence of males, thus establishing parthenogenesis beyond doubt.

Another interesting thing about whiptails is the difficulty in distinguishing one species from another, so take my tentative identification with a grain of salt. In 1906, Hans Gadow wrote "Most of the 'species' are so plastic, so variable, that they may well drive the systematist to despair. Not two authorities will, nor can, possibly agree upon the number of admissible species." [Proc. Zool. Soc. London 75 (1906), 227-375; note that this reference is given incorrectly as "Proc. Roy. Soc. London" in several places online]. When a creationist natters about "fixity of species", this is a useful comeback.

There's a volume called Biology of Whiptail Lizards that's not in our library at Waterloo, but is at Toronto. I've ordered it by interlibrary loan. For those who don't want to wade through it, there's a summary by Donald Blanchard available.

Posted by Jeffrey Shallit at 11:04 AM