The current wave of interest in atheism, fueled by religion's excesses, really does represent something new. For proof, consider the photo below, sent to me by a colleague, from an independent bookstore he recently visited: 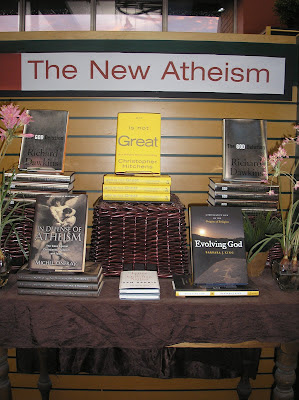 This kind of display would have been simply unimaginable at any other time in the history of North America.

And today, Representative Pete Stark (D-CA) will give his first speech after coming out as a non-theist. Again, I can't imagine any congressman having the guts to admit this in the past 50 years. (Maybe in the age of Ingersoll, but not recently.)

To any reasonable observer, these kinds of events do signal some kind of sea change in opinion.

But then, "journalist" Denyse O'Leary isn't a reasonable observer.

My parents were journalists, so I learned something about the proper practice of that craft from them. All journalists have biases, but good journalists learn to recognize them, so they don't say remarkably stupid things like, "the [atheist] crusade exudes an unmistakable air of desperation". Good journalists actually interview people who disagree with them, and summarize their views fairly.

Ahh, but fairness and objectivity mean nothing when God's on your side.

Posted by Jeffrey Shallit at 7:10 AM

Just a small note. The "new" atheism isn't new at all. it is Modernism. While you will hear people say we are in a "post-modern" era, no one really believes in post-modernism. It is easy to point out to someone how cultural relativism falls apart as well as all the "positivist" views of philosophy. So the "new" attacks on the "faith" are merely the restating of modernism to a generation of non-believers looking for something to believe in.

Still waiting for the main response to your on going discussion (even though it seems you and the other fella' are talking past each other... which is the main problem in this debate).

Oh, I am a big fan of Christopher Hitchens and his stance on Islamo-Fascism... but have you listened to his two debates so far with Christian professors? The debate with Mark D. Roberts wasn't all that good. Mark wasn't ready for the polemics coming from Hitchens masterful intellect. (IN fact I critiqued Dr. Roberts on his site regarding this debate.) However, I think by using his knowledge of classical literature and culture, David Allen White was a good match for Hitchens.

I am really waiting William Lane Craig or Ravi Zacharias to have a formal debate with Hitchens. Then we will see modernism kneel to theistic thought.

Yes, I have only recently run into the "Post-Darwinist" and am already convinced that she is an idiot of remaarkable purity.

Just out of interest, where was the bookstore?

I'm not sure where the bookstore is; my friend didn't say. But if I had to guess, I would say Winnipeg, Manitoba.