Our House on TV

The CTV show Dan for Mayor is filmed in Kitchener, Ontario, where I normally live. (This year I'm on sabbatical at MIT.)

I don't find the show particularly funny, but I have a soft spot for it, because last fall they filmed on our street. In Season 1, Episode 2, you can see the interior of our house. If you're in Canada, you can watch it on the CTV web site, but elsewhere you can buy it from the Itunes store or brave Megavideo. Our house appears about the 9 minute mark. Here's a screenshot: 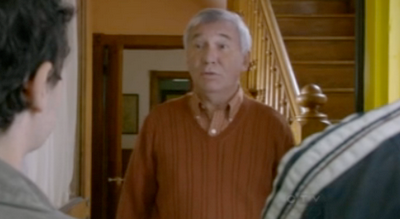 Oddly enough, where we're temporarily living, in Newton, MA, another TV show was filmed just around the corner: a pilot for a CBS show called "Quinn-tuplets".

Oh, yeah, I forgot to say - that's Carl Zehr, mayor of Kitchener, in the pic above. Too bad we weren't there.

Posted by Jeffrey Shallit at 8:14 AM