Here's a poem by Hooper Reynolds Goodwin that was published in the journal Scripta Mathematica in 1953. I liked it very much when I was a teenager, and I still think the last two lines are excellent.

This curve I'm plotting? A parabola.
This point is called the focus; it's the point—
Oh, no, not an ellipse. Ellipses have two foci:
Here, I'll show you one I've drawn.
You see the difference. These two lines of the parabola,
They stretch out wide and wider,
"World without end," as preachers say.
(I don't know what they mean; perhaps they don't);
But you see how it goes.

There was a man—Sir Isaac Newton, I believe it was—
Who had the notion a parabola was an ellipse,
Its other focus at infinity.
You may not understand just what he meant;
You have to sort of take the thing on faith.
The keenest scholar can't quite picture it, you know.

I've often thought,
It might be called a symbol of man's life;
A curve of ever-widening sweep.
And here in this world
Is the focus we may call, say, temporal interests,
Food and drink and clothes . . .
But yet it cannot be that this is all;
For out beyond the reach of sight must be
Another point, a heavenly focus, see?
'Round which the sweeping curves of human life
Complete the ellipse.
Fantastic? Well, perhaps,
But yet the more I think of it...

And here—
Another thing I've often thought about:
Suppose we draw here two parabolas
With axes parallel, and let the arms cross—
"Intersect" the word is—at this point.
Now if there be a focus
Somewhere out beyond the bounds of space,
And these are two ellipses,
As Sir Isaac thought they were,
Why, don't you see, they'll intersect again
Somewhere out there.
Just as two lives that once have crossed,
Then gone their separate ways,
And one has disappeared long since into the void of death
May—but who knows? It's just a thought...

Well, come again; I don't get callers often.
They don't see much in old folks nowadays,
And when a man's not only old, but got his head
Stuck always in a book of "AnaIyt!"
Young people think I'm queer; they can't see why
A man that doesn't have to study graphs
Should plague his head; don't understand that such
Dry, dull things as a parabolic curve
May bring up mem'ries of a face that's gone. 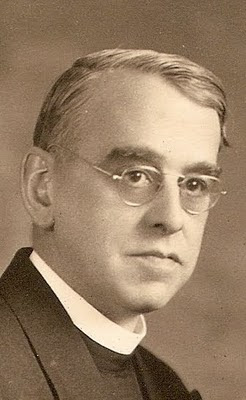 The author, Hooper Reynolds Goodwin (December 5 1891-October 13 1964), was born in Marblehead, Massachusetts. Raised by Unitarians, he attended Boston University and was ordained as a Methodist minister. Later he became an Episcopalian minister. He served in churches in Bethel and Randolph, Vermont.

I am very grateful to his granddaughter, Sue Maltais, for providing a photo and information about his life.

Posted by Jeffrey Shallit at 4:20 AM

Nice poem! But what's religious about it?

For somebody raised as a Unitarian, that’s religious.

I agree it's religious, though in a very mild way. It's also gently mocking of fuzzy religious phrases. Actually I'm mostly left wondering how you get from being a Unitarian to an explicitly Christian denomination (and without losing at least some level of skepticism along the way).

I suspect the point of prefacing this as "religious" was to avoid offending anyone who dislikes seeing religion presented at all except in strongly derisive terms.

More to the point, I've always liked conic sections, but I wonder if this kind of elegant math lulls some people into a kind of Panglossian view that everything fits together for a purpose. I think I would have appreciated this poem at one time, and I still understand the motivation of the author, but I also see it as exhibiting a kind of tunnel vision that everything can be as explained as neatly as a parabola as the limit of an ellipse.

Thank you for this. Who would have thought it would bring up a debate over what is "religious" vs. what is "spiritual".

This brought tears to my eyes. I was in sync with the author at the part about the second focus of a person's life, getting the concept a few words before it was actually stated. By the time I got to the two parabolas recrossing, "Somewhere out beyond the bounds of space" I was teary and yet I did not guess to what a literal degree he was going to take it.

In three days will be the first anniversary of my wife's death. She died the day before our 25th wedding anniversary.

Again, thank you for this.

P.S. I was raised Unitarian too.

Why are Unitarians so bad at singing hymns from hymnals?

Because they keep reading ahead to see if they're going to have to change the words.

I bet it's hard to find mathematicians who are also poets. My favorite is James Clerk Maxwell. (Of course, he was much more than a "mere" mathematician.) He wrote A Student's Evening Hymn.

Now no more the slanting rays
With the mountain summits dally,
Now no more in crimson blaze
Evening’s fleecy cloudless rally,
Soon shall Night front off the valley
Sweep that bright yet earthly haze,
And the stars most musically
Move in endless rounds of praise.

While the world is growing dim,
And the Sun is slow descending
Past the far horizon’s rim,
Earth's low sky to heaven extending,
Let my feeble earth-notes, blending
With the songs of cherubim,
Through the same expanse ascending,
Thus renew my evening hymn.

Thou that fill’st our waiting eyes
With the food of contemplation,
Setting in thy darkened skies
Signs of infinite creation,
Grant to nightly meditation
What the toilsome day denies—
Teach me in this earthly station
Heavenly Truth to realise.

Give me wisdom so to use
These brief hours of thoughtful leisure,
That I may no instant lose
In mere meditative pleasure,
But with strictest justice measure
All the ends my life pursues,
Lies to crush and truths to treasure,
Wrong to shun and Right to choose.

Then, when unexpected Sleep,
O’er my long-closed eyelids stealing,
Opens up that lower deep
Where Existence has no feeling,
May sweet Calm, my languor healing,
Lend note strength at dawn to reap
All that Shadows, world-concealing,
For the bold enquirer keep.

Through the creatures Thou hast made
Show the brightness of Thy glory,
Be eternal Truth displayed
In their substance transitory,
Till green Earth and Ocean hoary,
Massy rock and tender blade
Tell the same unending story—
"We are Truth in Form arrayed."

When to study I retire,
And from books of ancient sages
Glean fresh sparks of buried fire
Lurking in their ample pages—
While the task my mind engages
Let old words new truths inspire-—
Truths that to all after-ages
Prompt the Thoughts that never tire.

Yet if, led by shadows fair
I have uttered words of folly,
Let the kind absorbing air
Stifle every sound unholy.
So when Saints with Angels lowly
Join in heaven’s unceasing prayer,
Mine as certainly, though slowly,
May ascend and mingle there.

Teach me so Thy works to read
That my faith,—new strength accruing,—
May from world to world proceed,
Wisdom's fruitful search pursuing;
Till, thy truth my mind imbuing,
I proclaim the Eternal Creed,
Oft the glorious theme renewing
God our Lord is God indeed.

Give me love aright to trace
Thine to everything created,
Preaching to a ransomed race
By Thy mercy renovated,
Till with all thy fulness sated
I behold thee face to face
And with Ardour unabated
Sing the glories of thy grace.

Yeucch. If that's the poetry of James Clerk Maxwell, remind me not to read any more.

What a fawning, subservient, earnest and boring piece of tripe!

You didn't seem so troubled by this line:

"Is the focus we may call, say, temporal interests,
Food and drink and clothes . . .
But yet it cannot be that this is all;
For out beyond the reach of sight must be
Another point, a heavenly focus, see?"

Umbrella:
You didn't seem so troubled by this line:

You seem to be under the impression that (a) the religious significance of Goodwin's poem escaped me or (b) I have a problem with all religious expression in art and literature.

The difference between Goodwin and Maxwell is that Goodwin is not dogmatic and fawning. And his poetry is much better!

"I proclaim the Eternal Creed" - get real.

Oh, I love this parabola poem! I've used it for nearly 25 years teaching high school mathematics. It fits wonderfully in our unit on conic sections. Many of my students have told me they like it, too; even those students who say they don't usually like math or poetry. Thank you for sharing this poem on your website, along with some information about the author. I'll be sure to pass this along to my students, too.