A Silly Paper in a Silly Journal

The International Journal of Mathematics Research, also known as IJMR, is officially a Silly Journal™. Here's why:

Reason #2: The journal's listing of their editorial board contains spelling errors, lists at least one editor twice, and contains not a single person in the countries where mathematics research is strongest (e.g., USA, Canada, France, Germany, Netherlands, UK, Russia, Italy, Australia). Also, no e-mail for any of the editors is given.

Reason #3: Recently they published this paper: Ali Abtan, "A New Theorem for the Prime Counting Function in Number Theory", in Volume 7 (2015). Containing ungrammatical and false claims like "So till now their is no formula for the prime counting function π(x) as you see from the end of 18th century till now" (completely ignoring the work of Meissel, Lehmer, Lagarias, Miller, Odlyzko, and others), this paper is a mess. Understanding why the paper is silly is a bit more involved, so I'll start by explaining one aspect of what makes a paper good.

A general principle about theorems is that they should be (within reason) as general as possible. For example, if you prove that if some property of a specific set S holds, then before publishing it you should think about what more general property S has that makes it possible to get the result. Here's a specific example: recently I saw a reddit post that pointed out that every prime p greater than or equal to 5 can be expressed as p = (24n+1)½, for some integer n. This is totally uninteresting, but the reason why it's uninteresting is that this property has basically nothing to do with primes at all! Rather, it is trivial fact that every number q that is relatively prime to 6 has the property that q2 ≡ 1 (mod 24), a fact that can instantly be verified by computing (6k+1)2 and (6k+5)2 and observing that k(k+1) is always even. Since every prime greater than or equal to 5 is relatively prime to 6, the result follows immediately. But, I emphasize again, the result is really about numbers relatively prime to 6, not primes. It captures basically nothing interesting about primes at all.

Now, in Abtan's paper, what is the silliness? He states the following formula for the prime-counting function π(x), which is the number of primes ≤ x. (For example, π(10) = 4.)

Now, as stated, this formula contains two silly features. First, X is undefined; it should be x. (Where were the editors or referees for this paper?!?) Second, the formula is manifestly incorrect when x is not an integer (for example, try x = 2.5). So we shouldn't use x, because among mathematicians, x usually implies a real-valued variable. Let's use N instead.

With these two corrections, the formula becomes correct:

Let's overlook the fact that the formula is completely useless for computing prime numbers or π(N), and instead focus on the formula itself. Remember the principle: try to figure out the class of sequences for which such a formula might hold. Well, let's try some interesting but completely unrelated sequence, like the squares. Instead of π(N), we might define sqrt(N), the number of positive integer squares ≤ N. Does a similar formula hold?

How can this be? Well, the obvious answer is that Abtan's formula (for which he gave a long and complicated induction proof) has nothing to do with primes at all!

Let us generalize Abtan's formula and give a very, very simple proof of it. (It is often the case that if you generalize a theorem properly, it becomes easier to prove than a specific case might be.)

To generalize it, let S be any set of positive integers. S could be the prime numbers, or the positive square integers, or anything else. Let πS(n) denote the number of elements of S that are ≤ n. Then we claim that

This has an easy proof by diagram! To see it, draw a histogram of the function πS(n) from n = 1 to N. For example, for the primes and N = 12, this would look like 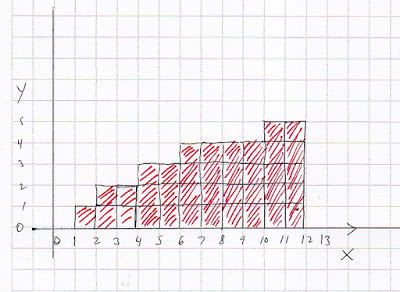 The total number of red boxes is clearly Σ1≤n≤N πS(n). 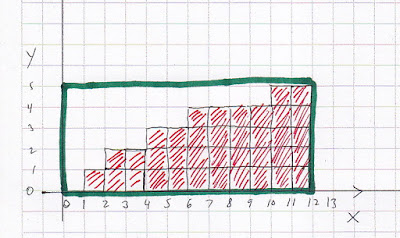 The total number of boxes here is clearly NπS(N).

How about the boxes in the rectangle which are not colored in red? Well, the top row is all blank boxes until the first prime hit in this row, which is 11. So there are 10 boxes. In the next row, there are all blanks until the first prime hit, which is 7. So there are 6 boxes. And so forth. So the total number of white boxes is Σ2≤p≤N (p - 1) (or, more generally, Σ1≤s≤N and s ∈ S (s - 1).) Thus we have proved

This is the nice version of Abtan's formula. To get his formula, just add πS(N) to the left sum and subtract it from the right, then divide by N, to get

So we see that Abtan's formula has nothing to do with primes at all, really.

Any competent referee would have seen this immediately. Congratulations, IJMR. You're officially a Silly Journal™.

Posted by Jeffrey Shallit at 11:52 AM