Just back from the Newton Public Library book sale, held in Auburndale. I love book sales, because they're an opportunity to build my pseudoscience collection without directly subsidizing the authors.

I picked up the 992-page The Evolution Handbook by Vance Ferrell, which is published an outfit called "Evolution Facts, Inc." and headquartered in Altamont, Tennessee. They seem to have a website, too. 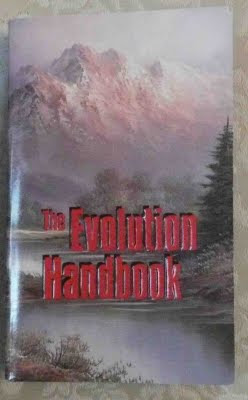 What's fun about creationist books is that it's so easy to refute them. To show this, I conducted an experiment: I turned to three pages at random, and looked for the first lie I could find. Here are the results:

p. 176: "...the experts have so far been unable to agree on the length of a rubidium half-life. This renders it useless for dating purposes. This is because the samples vary so widely. Abrams compiled a list of rubidium half-lives suggested by various research specialists. Estimates, by experts of the half-life of rubidium varied between 48 and 120 billion years! That is a variation spread of 72 billion years: a number so inconceivably large as to render Rb-Sr dating worthless."

Reponse: BOGUS. In the early days of nuclear chemistry it was hard to be precise about very long half-lives, but better chemical and radiometric techniques have long removed the uncertainty. I looked online for Rb-87 half-lives, and I found strong concordance: for example, 4.7E10 and 4.88E10. This page discusses a variety of different estimates of the decay constant, all of which are within about 10% of each other. I don't know who "Abrams" is or where the estimate of 120 billion years came from, and The Evolution Handbook contains no reference on this point.

p. 531: "About 15 years before his [Dubois'] death, and after most evolutionists had become convinced that his find was nothing more than bones from a modern numan, Dubois announced his conviction that the bones belonged to a gibbon!"

Response: BOGUS. Paleontologists believe the remains are about 700,000 years old, although there is still some controversy about the femur. The claim about the gibbon is false.

p. 801: "Darwinism unleashed a moral holocaust upon the world, one which deepens with each passing decade."

Response: BOGUS. People have been killing each other since the dawn of mankind. Evolution is a scientific theory and a description of the world, not a guide about how to behave. The atrocities blamed on "Darwinism" are actually due to nationalism, religion, or political opportunism.

Not bad, eh? Three pages, three lies. Creationists have to lie, because the evidence is all against them.

Posted by Jeffrey Shallit at 11:07 AM

Ooooo juicy! You could make a regular column out of this!!

Interests declared: I'm a non-biologist who likes to know more about evolution, and finds learning the refutations of creationist arguments educational (and rather satisfying).

Curious, do you ever worry about indirectly creating a market for this kind of book?

i.e. If you take over a dozen of these books out of the garage sale or used book store market, couldn't that action trickle down (somehow) to the new book market?

I know it's drop-in-a-bucket stuff and if it were me, I personally wouldn't lose sleep over it, but I wanted to know what you thought.

You're absolutely right, of course. Even buying a used copy indirectly benefits the author a bit, since it reduces the supply of used books and hence makes buying new books more attractive.

I love book sales, because they're an opportunity to build my pseudoscience collection without directly subsidizing the authors.

Jeffrey Shallit, meet the Amazon used book market. (Watch the shipping cost.) Oh, and note that this is "Book 23 of Evolution disproved series"!

Just 22 more book sales and posts to go and you'll be caught up with one school of creationism.

How much play did this book get in the Newton Public Library system?

Yes, I know about that - and other places, such as "AddAll". But you can't beat this one for the price.

"the half-life of rubidium varied between 48 and 120 billion years!"
Neither data would ever lead to a world created in 6 days. Nor even 6000 years ("one day is with the Lord as a thousand years, and a thousand years as one day")...