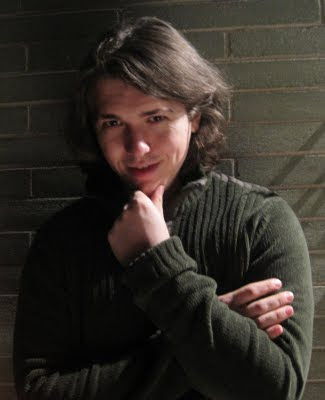 Every year, the Computing Research Association gives out awards for the best research done by undergraduates in North America. This year, my student Elyot Grant shared the top prize for males with Matt McCutchen from the University of Maryland.

Second, a problem of Alon and Spencer shows that for all ε > 0, there exists an infinite binary word such that any two consecutive blocks xx' of the same length t > N differ in at least (1/2 - ε)t positions. This raises the natural question, can the bound of (1/2 - ε) be replaced by a number > 1/2? Elyot proved the answer is no, using an extremely clever idea. This paper, co-written with my postdoc Thomas Stoll, appeared in the journal Acta Arithmetica.

Third, Elyot found beautiful results on “open” and “closed” languages, which are analogous to open and closed sets in topological spaces. His work with me and John Brzozowski was accepted for the DLT 2009 conference, and Elyot gave a beautiful talk on the subject.

So, congratulations to Elyot on this prestigious award!

Posted by Jeffrey Shallit at 9:44 AM

Jeffrey, I want to thank you for your blog and much of the work you have done explaining information theory and how it relates to evolution. The internet is becoming increasingly full of religious apologists making these lists of bogus claims;
- evolution can not produce "new information"
- information only comes from a mind/intelligence

It is not simply a case of pointing out the flaws in these arguments to these people, it requires complete removal of a whole series of erroneous ideas from their minds that they are convinced are true. I just came across this on youtube where this guy manages to reel off a whole series of these canards in just a matter of minutes - http://www.youtube.com/watch?v=x2iZHCBMN1Y

This is what happens when people have their brains filled with nonsense by Meyer and Demsbki, without ever checking to see what actual credentialled scholars in these areas make of their claims.

shared the top prize for males

The prizes are sexually segregated?

Yes, there are prizes for males and females - as you'd see if you click on the link.

Congrats to you and Elyot.

Second, a problem of Alon and Spencer...

Do you have a preprint of this paper? I can't access Acta Arithmetica and can't find the paper on your website.

No - N depends on epsilon. Then the result holds for all t > N.

If you send me e-mail reminding me of your address, I'll send you a copy.