About a year and a half ago, I got a kit from National Geographic's Genographic Project to determine my paternal "deep ancestry", and I talked about the results here.

This year I got a kit to do my maternal line, through mitochondrial DNA, and the results are depicted below: 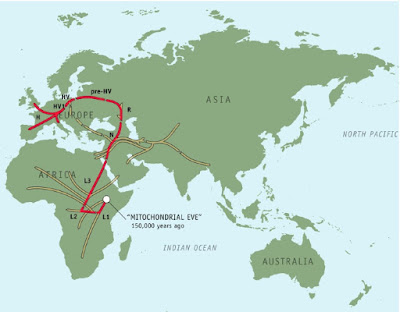 No real surprise: I am a member of haplogroup H, the most common mitochondrial haplogroup in Europe. My great-grandmother was Emma Hesburn Dean, whose ancestors likely came from England or Ireland. (I don't know more because she was adopted at an early age, and I've been unable to locate her parents, who are said on her death certificate to be Charles Dean and Barbara Hall, in any genealogical records.)

Mitochondrial Eve, the most recent common ancestor (along the female line) of all humans, probably lived about 150,000 years ago in East Africa. From there, mutations in the particular region of mitochondrial DNA suggest the following line of descent: L1/L0 -> L2 -> L3 -> N -> R -> pre-HV -> HV -> H. L3 corresponds to the first humans to have left Africa. N lived in the eastern Mediterranean and western Asia. HV corresponds to Turkey and Georgia. Finally H corresponds to the rise of the Aurignacian culture in Western Europe. H probably arrived in Europe about 30,000 years ago. My maternal ancestors probably lived in England or Ireland for thousands of years before emigrating to the US - perhaps in the 1800's.

Posted by Jeffrey Shallit at 12:03 PM

Hey, cousin, can I borrow a hundred bucks? I'll pay you back Tuesday. We're family, right?

I read about the study on PZ's site about a year ago and couldn't wait to order a kit. Me Cro-Magnon. My family came from Ireland/England sometime before 1800. I was able to trace my Dad's family to Indiana in 1821 through Ancestry dot Com but haven't had any luck earlier.

“Mitochondrial Eve,” the hypothetical mother of all modern humans who lived about 150,000 years ago, might be lying about her age. A key assumption in determining how long ago she lived—that molecules of mitochondrial DNA do not swap segments with one another—is false, researchers now say. Their findings call into question a multitude of findings in evolution, early human migration, and even the relations between languages. "

Your map is incomplete!
It is a well established fact that humanity arose in Siberia.
Apes evolved in Africa. But it was first when they came to Siberia and needed to make clothes and vodka to survive they became human.