Solution to the Coin Quiz

I asked, What US coin has the highest value, according to the denomination in numbers (not words) given on it?

To start off with, you need to know that in the early days of US coinage, some coins expressed their value as a fraction of a dollar. For example, here's the reverse of an early half-cent: 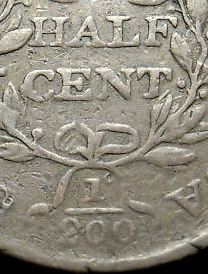 Except that in 1801 and 1802, somebody wasn't paying attention and didn't engrave the dies properly. So you got some large cents in 1801 and 1802 with the following reverse: 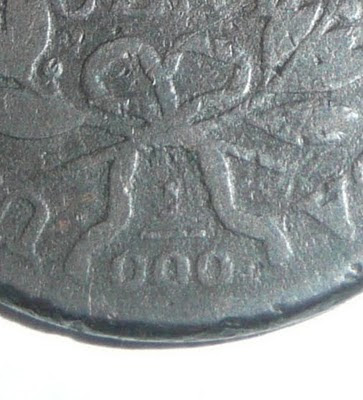 So the answer to my quiz is, the largest denomination on any US coin was infinite.

Sorry - but I warned you it was a trick question.

Posted by Jeffrey Shallit at 9:00 PM

Of course, this solution assumes you accept 1/0 == infinity :)

Yeah, I know, but in the extended reals, it's legit to define 1/0 = infinity.

In the extended reals don't we have both +infinity and -infinity? 1/0 still isn't defined. If we are in the real projective line then we get a single infinity and so saying 1/0 = infinity makes sense. But in that situation there's then no ordering only a topology.

If we want to define currency as only applying to the non-negative section of the extended real line then we can define 1/0 as infinity and be ok. But that seems artificial.

You can define 1/0 = infinity in the extended reals, but it's true that you get continuity problems if you do so.

Carlos: you make a common error, which is assuming that defining 1/0 = infinity also requires that properties like cancellation must behave the same as in the ordinary reals. Not so.

I should have added that in APL, 0/0 is defined to be 1, which is generally a good definition (although sometimes it is more convenient to define it to be 0).

Let's generalize: a/0 = infinity in many (tangent for the reader: all? why not?) sets where infinity is unsigned. The classic example is the real projective line, where a/0 = infinity, but infinity+infinity is undefined! (For this reason, Mr Shallit, I read your reference to the extended reals as being to specifically the Projectively Extended Real Numbers, not the usual Affinely Extended Reals... right?)

However, pushing this, it seems to me that whenever money is involved, it would be universally acknowledged as crucial that we can differentiate between having an infinite amount of money and being infinitely in debt. So I put it to you that in the set of all sets used for calculating monetary units, a/0 = undefined. QED :-)

What was tricky in the question was that there was no hint that one had to look at early US coins too. Oh well. Interesting.

I also recall that sometime ago, perhaps in the 19th century, some US State proposed that the value of π be set equal to 22/7, by law. It takes a while for people to become numerate.

A critical phrase in the puzzle was "the highest value". Is infinity the highest value? Does the relationship "greater than" apply over the extended reals? I'm not arguing, I'm just asking.

Yes,+ infinity is greater than any real in the extended reals.

It could be amusing to deposit one of these at a bank and tell the teller to enter the value as 1/0, "exactly as printed". Seems to me every measure theorist should have one of these coins! Are they worth a lot?

I'm glad to see someone appreciates the coin!

You can get these coins at coin shows or on ebay. Prices range from about $100 to more than $1000,
depending on condition.

Jeffrey Shallit:You can get these coins at coin shows or on ebay. Prices range from about $100 to more than $1000,
depending on condition.

Infinite expression is of finite value.

Regarding the value of Pi, that's not quite what happened. There was a crank and a bill almost passed in Indiana acknowledging his work. The argument didn't actually give in any meaningful sense a specific value of Pi (from the text of the bill you can get about 5 or 6 different values of Pi if you try to follow it through). But the bill never passed when a few mathematicians caught wind of it and explained why this was stupid.

When I was a kid in high school I asked my math teacher what the sum of all the integers was (expecting the answer to be zero). I don't recall his answer beyond him saying it was more complicated than that.

Maybe that's part of why I eschewed math for biology... :)

js:I'm glad to see someone appreciates the coin!

well, i liked it. you can see from my guesses that i ran across the 1/100 and the 1/200 but the idea of an error did not occur to me (although i still think the question could have been worded more clearly with respect to "denomination"

To mistake a misprint for actual value, priceless. This sounds like something that I'd see on the _Good Math, Bad Math_ blog.

I'd say the original question is sufficiently qualified: "What US coin has the highest value, according to the denomination in numbers (not words) given on it

Why Hockey Sticks are True said...

For my 1/200 cents, the ultimate arbiter is the software Mathematica. Since this is the workhorse for actually doing mathematical computations of unlimited complexity, whatever they say goes for me. Asking the software to do the one over zero calculation gives:

“Explicit division by zero will generate a warning message: