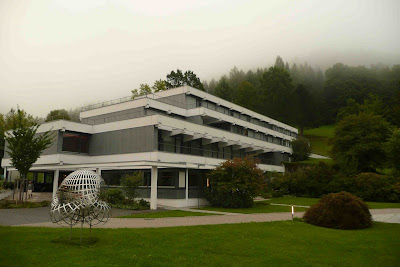 For mathematicians, it's a little bit like Mecca for Muslims: everybody wants to go at least once in their lifetime.

I first heard about Oberwolfach when I was an undergraduate. My first significant paper had finally appeared in the Journal of Number Theory after a very long delay (that's another story), and I sent it off to some mathematicians I thought would be interested. One replied, "But I just heard Schinzel talk about this at Oberwolfach..." I had been scooped! During the long delay in publication, a Czech graduate student studying in Poland had found the same result. And what was Oberwolfach?

It's a research center and conference site. Nowadays there are several similar places, such as the Banff International Research Station and the Centre International de Rencontres Mathématiques, but Oberwolfach is the oldest and most famous. (There's a history of the place here.)

For those who are not familiar with what happens at a place like Oberwolfach, here's a brief account. For 50 out of 52 weeks of the year (the exceptions being Christmas and New Year's), the Institute is host to about 50 mathematicians who arrive from Germany, the rest of Europe, and around the world. Each Sunday, they typically arrive by train at either Hausach or Wolfach, two small towns in a river valley in mountainous southern Germany. From there they take a taxi to the Institute, which is located on a remote tree-covered hillside that's a good 5 km from the nearest town.

There are two main buildings. One houses the dormitory and cafeteria, the other the library and conference rooms. Oberwolfach provides three meals a day; at lunch and dinner there is assigned seating, which changes at each meal. The main work takes places Monday through Friday, and usually consists of some talks (we had about 4 hours each day) and working on problems in small groups (all the rest of the day and night). There are numerous coffee machines (Paul Erdős supposedly once said that "A mathematician is a machine for turning coffee into theorems", although it has also been attributed to Rényi), where espresso and café au lait can be had, gratis, at all hours. Drinks, both alcoholic and non, can be bought for very nominal prices. The picture below shows the result after a long night of drinking and mathematics. 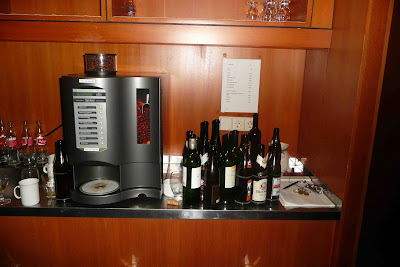 The dormitory rooms are very spartan, with no decorations and no TV, radio, or phone. Although there is some wireless internet available in both buildings, most dormitory rooms do not have access. You're supposed to be talking to other mathematicians, not sitting in your room!

I was there for a "mini-workshop" on Combinatorics on Words. We had 17 participants, and there were two other workshops running concurrently. This differs from most weeks, which are typically devoted to a single theme and involve more participants.

Oberwolfach also offers other kinds of programs, such as "Research in Pairs", which allow two mathematicians from different institutions to meet and work together for a longer period.

The library is really outstanding. Unlike many libraries, they have not switched to electronic subscription, and they continue to receive paper copies of journals. It is a real pleasure to walk down the long aisle and pick up a journal to browse. Although I thought I knew the mathematical literature reasonably well, there were still some journals I had never heard of. 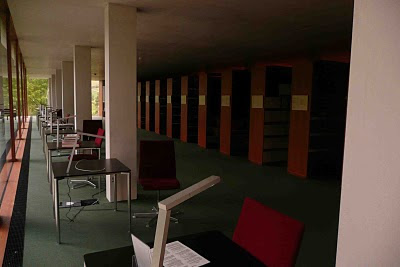 Oberwolfach also has a tradition of putting books written by participants on a special shelf in the library building. You can see my book displayed there below. 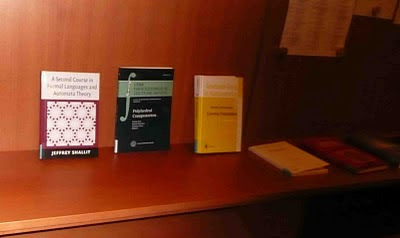 Another Oberwolfach tradition are the problem books. Any mathematician can provide an unsolved problem, or comment on a previous one, and there are dozens of problems by famous mathematicians like Erdős. Here's a page from the problems book with a problem by Mendès France: 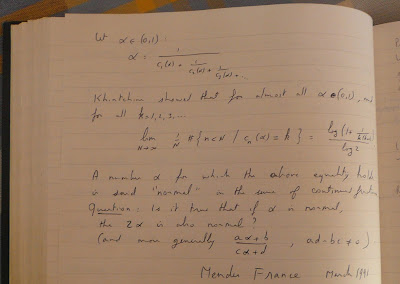 On Saturday, all the mathematicians leave in taxis arranged by the Institute. And on Sunday the cycle begins again.

I had a really great experience there. There were some excellent talks by my colleagues, and I got a chance to discuss some open problems with them. We even solved one problem, and made some progress on others. I'm hoping to go again some day!

Posted by Jeffrey Shallit at 5:04 AM

Don't forget about the piano. And the Wednesday hike to get coffee and cake!

It's truly a fabulous place.