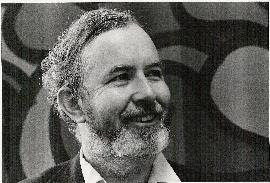 I was very sad to learn this morning that my old friend and colleague, Gene McDonnell, died on August 17.

Gene was actively involved in the development and promotion of APL. He was one of the first people I met when I worked at the IBM Philadelphia Scientific Center, and he later hired me to work for I. P. Sharp in Palo Alto.

Gene had a wide variety of interests. He could talk knowledgeably about mathematics, science and literature, and he had a playful sense of humor. He wrote a beautiful paper entitled "Complex floor", which gave an entirely new way to generalize the familiar greatest integer function (or "floor") to the complex plane. As an undergraduate, I wrote my thesis on his extension, showing that you could use it to define continued fractions for complex numbers -- though there are still questions unresolved about that!

Gene and I wrote a paper together entitled "Extending APL to infinity", which suggested some ways of adapting the computer language APL to the extended real numbers. We also made a proposal to extend APL to infinite arrays, basically involving some lazy evaluation schemes. As far as I know, nobody ever implemented our ideas, although I still think it would be interesting.

Gene wrote a series of excellent columns for APL Quote-Quad (now sadly defunct) entitled "Recreational APL". For many of us, it was the first thing we turned to when the new issue arrived. I remember in particular one beautiful column about leap years that inspired a paper I wrote, "Pierce expansions and rules for the determination of leap years", in 1994.

Gene was intellectually active up to his last days. The most recent message I received from him was in April, where he proudly announced the publication of his new book, At Play With J, a compendium of his columns from Vector, the British APL magazine.

I'll remember Gene for his bright blue eyes, his warm and engaging smile, and his intellectual achievements. Farewell, old friend.

Posted by Jeffrey Shallit at 8:00 AM

Thank you for this.

"Soldier, kindly point your rifle away from your stomach."

Maybe it is somehow inappropriate to ask this question here. Would You like to point a few references about complex continued fractions? Is You thesis available somewhere?

My thesis is currently only available in paper form, but I'll try to get it scanned in and post it sometime soon.

There is a paper by Asmus Schmidt on complex continued fractions, but he takes a very different approach.

ssIf I remember correctly, the J language, also crafted by Iverson, do contain an infinity symbol.

I don't know if you're still reading this, but my undergraduate thesis is now available here (scan down to 1979).