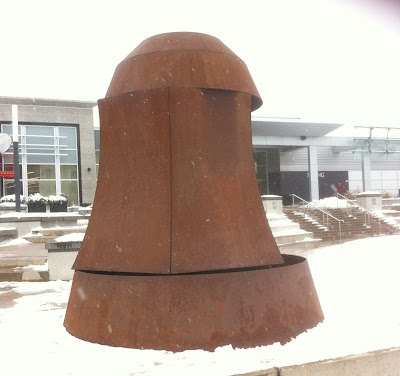 This rusty piece of junk is, believe it or not, an award-winning piece of public sculpture that is the most prominent feature of a major downtown square in Waterloo, Ontario.

It is entitled "Waterloo Bell - Bell for Kepler" and was created by Royden Rabinowitch. Recently Rabinowitch accepted the Governor General's Award in Visual and Media Arts for this and other work - an award that carries with it a cash prize of $25,000.

Here is how Rabinowitch described it: "The sculpture’s 3 stacked, major segments simultaneously appear to float and be at risk of falling down. They resemble someone attempting to stay in balance." No, it resembles a rusty piece of junk from a disused factory.

This has got to be one of the ugliest and most unappealing pieces of public art I've ever seen. Let's get rid of it.

Posted by Jeffrey Shallit at 5:59 PM

There is a similar work in St. Louis, a row of large sheets of rusty steel set up like giant dominoes. City workers actually hauled it away once since they thought it was scrap someone had dumped.

"They resemble someone attempting to stay in balance."

So it's a statue of a drunk?

Perhaps someone should take some sidewalk chalk and gussy it up ;)

I like it actually. The contrast between the circular base and top, and the angular, unbalanced middle section is, well ... awesome!

Assuming this sculpture is to be classified as "post-modern," I'm inclined to favor the following critiques, found at wiki/postmodernism: "As well as describing certain tendencies of contemporary art, postmodern has also been used to denote a phase of modern art. This position is adopted by both defenders of modernism such as Clement Greenberg, as well as radical opponents of modernism such as Félix Guattari, who calls it modernism's "last gasp". The neo-conservative Hilton Kramer describes postmodernism as "a creation of modernism at the end of its tether.""

What does Kepler have to do with it?

Someone put a lot of effort in dragging that in from a junk yard, let's not dishonour them by removing it. Seriously though, regardless of what I think of it, at least a few people agree that it's an award worthy sculpture.

Imagine how much improvement the addition of a carefully placed plunger would make:
Dalek Action Figure

I feel this way about a lot of the modern art I see in museums and public plazas.

http://www.rit.edu/emcs/admissions/bca/blog/item/the-albert-paley-legacy might make your work of art actually seem nice. OTOH, the whole world is subject to this dreck.