While on vacation in Wyoming, I saw this sign at the First Baptist Church of Thermopolis: 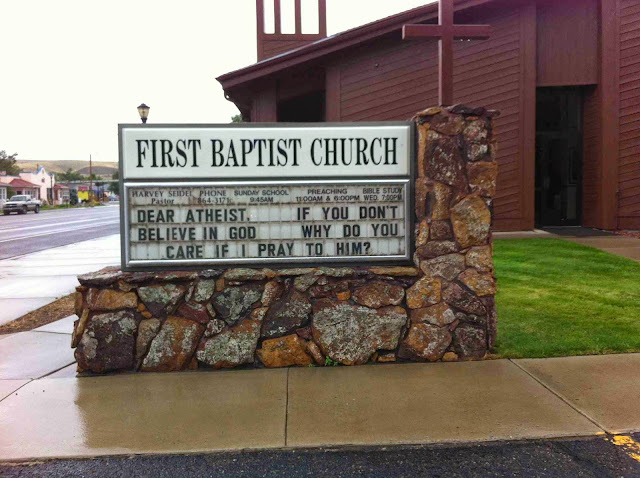 If you don't believe in God
Why do you care if I pray to him?

My guess is that Pastor Harvey Seidel is not really interested in an answer. If he were, he would just find some atheist and genuinely ask. Instead, it's probably intended as a "gotcha".

Nevertheless, I'm going to pretend that the question is an honest one and do my best to answer.

You ask, if I don't believe in God, why do I care if you pray to him?

The simple answer is, I don't. Neither I, nor most of the atheists I know, give a damn one way or another. I personally wouldn't waste my time with that particular activity, but then there's a lot of activities that others enjoy -- such as stock car racing or listening to Celine Dion -- that I consider a waste of time and don't participate in. If prayer makes you happy and gives you some consolation, go right ahead. You don't need my or other people's approval to pray to your god -- be my guest.

It's not your prayer I'm concerned with. It's not even your beliefs, which I think are irrational. Lots of people have silly and irrational beliefs.

I'm not saying you do any of these things. I know that Baptists are a very diverse bunch. Maybe you marched in solidarity with black people in Selma. Maybe you welcome gay people in your church. Maybe you conduct same-sex weddings. Maybe you acknowledge the truth of evolution and global warming. Maybe you warn your flock about the sin of anti-Semitism. If so, more power to you. We can join hands and work together.

Speaking of Christian privilege, I hope you're not one of those theists who think they can violate the separation of church and state by having teacher-led prayer in public schools, or forcing non-theists to listen to sectarian prayers at the beginning of government meetings. Not only is it not respectful of those whose beliefs differ (and there are lots of us), it's not constitutional, either.

Do I think we'd all be better off if you didn't pray? Probably. There are a lot of societal problems that won't be fixed by prayer. As a famous agnostic once said, "The hands that help are better far than lips that pray."

Still, I'll repeat myself: pray all you like. Neither I, nor most atheists, care. But we do care about your actions when your irrational beliefs take you down roads that adversely impact other people's rights, and create policies that are bad for non-Christians and bad for society. When you do that, suddenly we care. We care a lot.

Posted by Jeffrey Shallit at 7:20 AM

I'd hazard a guess that the sign is referring to recent litigation in a few places about prayer at city council meetings. To which my objection isn't about praying per se, but about the assertion of Christian hegemony it implies, in a a setting where justice must be done, and seen to be done, for all regardless of creed.

Which of course makes this sign a typically disingenuous obfuscation of the reality of Christian privilege.

Good point, I'll add something about it.

Yep. I don't care if you pray to your god. I care when you insist that everyone must do so.

Similarly, I don't care that Christians think I'm going to hell. However, I do care that they think that *they* are going to heaven, at least insofar as they are using that supposition to inform their positions on public policy

sounds like your issue is with GOD'S WORD, not christians.

Hardly, little believer. I don't think there is a god, so there's no "god's word".