Still here in Tucson at the mineral and gem show.

I started this morning at the Smuggler's Inn, far on the east side of town. This show is dominated by the large number of foreign dealers, particularly from China and Russia. If you're looking for fluorite, wolframite, cinnabar, scheelite, or blue apatite, this is the place for you.

For me, some of the nicest specimens here were the large green fluorites from Hunan province. Here a gentleman from the Huanqiu Crystal Mineral Museum is holding one: 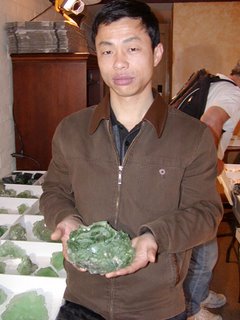 One of the nice things about the show is meeting people you've read about before in places like the Mineralogical Record. Here's the legendary Alfredo Petrov, a specialist in Bolivian minerals: 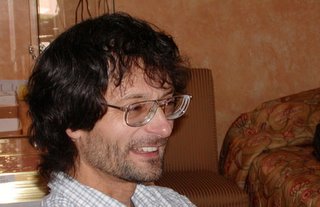 After a few hours at the Smuggler's, I went on to the Inn Suites. First, it was off to say hello to Richard Sittinger, who runs the Mineral of the Month Club. He seemed pretty busy! 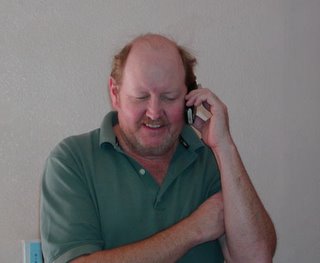 Next, I stopped in to see Bill and Anne Cook of Virgin Valley Sales, who always have a large number of rare and unusual minerals for sale. 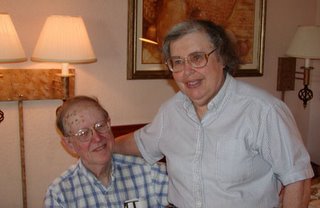 Now for the minerals. Here's a spectacular amazonite and smoky quartz from The Collector's Edge. 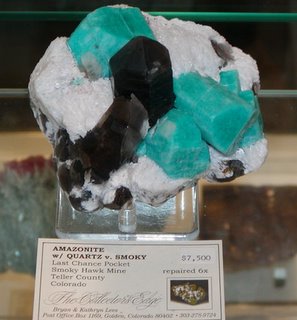 And here's a beautiful smithsonite from the same dealer: 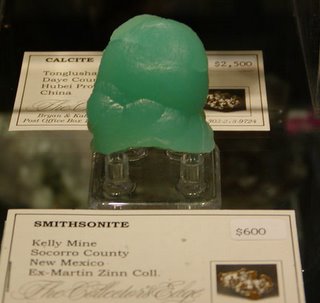 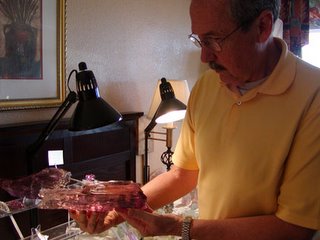 And Vasconcelos Brazil had this spectacular large quartz cluster for sale. Note my cell phone at the lower left for scale. 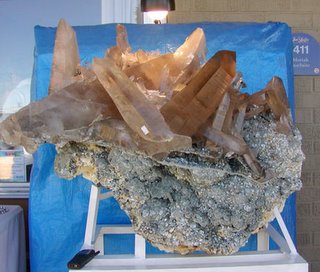 Many meteorite dealers have rooms at the Inn Suites. Mike Farmer is one of the most famous meteorite hunters; he had a new lunar meteorite, which he kindly posed with: 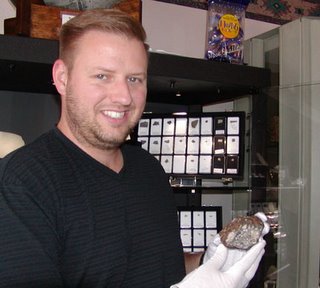 Lunar meteorites are chunks of the moon that have been knocked off by an impact. They float around in space for a while and sometimes eventually hit the earth, but it takes a trained eye and laboratory analysis to recognize them (we know from the Apollo missions what moon rocks look like). And here's the meteorite by itself: 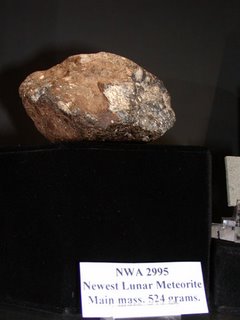 There was also a reception in honor of Steve Arnold, a meteorite hunter who found the new main mass of the Brenham, Kansas pallasite this fall. Here he is with this 640 kg specimen: 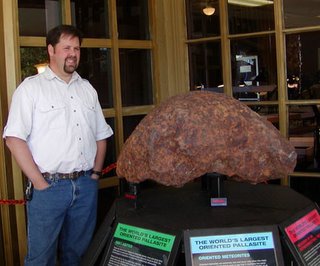 Pallasites are stony-iron meteorites that consist of olivine crystals floating in a matrix of iron-nickel. They are believed to be parts of asteroids where the mantle and core meet.

Signing off for now - more tomorrow.

Posted by Jeffrey Shallit at 8:05 PM

Thanks for sharing the excitement, and thanks for the great photo of the legendary Alfredo! :-) Lizzie in NY