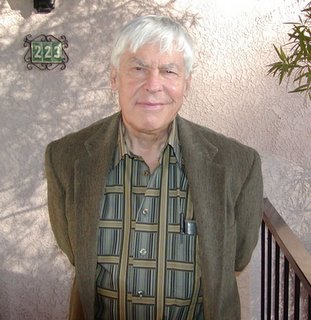 Stephen Smale is a world-famous mathematican and winner of the 1966 Fields Medal, mathematics' highest award. He's also a famous mineral collector, with one of the world's best private collections, and he has a new book coming out in April, featuring his collection. I had the chance to sit down with him this morning at his room at the Westward Look Resort and talk about politics, mathematics, and minerals. A Recursivity exclusive!

I've transcribed our discussion from a cassette tape. I've rearranged the discussion a bit, omitted some parts that were inaudible on the tape, and removed some others, but other than that, this transcription is more or less verbatim.

JOS: You were actively involved in protests against the Vietnam War at Berkeley. I'd like to know if you see any parallels between that time and now.

SS: Yeah, sure. Iraq has quite a bit of parallels with Vietnam.

JOS: Have you been moved to react in any manner?

JOS: I know that at one point you were working on your autobiography, and you completed a chapter or so. But then I came across the biography by Batterson. Do you still plan to work on an autobiography?

SS: No. With that book out, I don't think so. I published something called "Some autobiographical notes" - I think it's in my collected works. If it's not there, it's certainly in the volume for my 60th birthday. I think Batterson used those notes since they were already published when he wrote the book.

But after that book he's written... He really did a good job on it. He's very thorough, scholarly and accurate.

JOS: So, are you happy with the Batterson biography?

SS: Yes, I am. Especially from the point of view of being very accurate, careful, and documented. He doesn't in fact, indicate how careful he is. I mean, so many of his quotes are taken from taped interviews. He doesn't say that anywhere! He should, because people would then realize the authenticity of it. But, you know, the quotes are taken in general from taped interviews, and he has the tapes, so he has very thorough documentation. So from that point of view I think it's great.

JOS: In the past, you've spoken enthusiastically about computer science and the challenges it brings to mathematics. Are you still enthusiastic along those lines?

SS: Yes, my main job is in a computer science institute.

To oversimplify it, I come from the more continuous version of science and mathematics. Computer scientists tend to come from the discrete tradition. And you know, that brings us to some different points of view. My own conflict there is that the computer science department in which I am in is very narrowly focussed, in seeing so much of the science in terms of the discrete computer science tradition. So there have been some conflicts over hiring people.

I like to hire people that have a more deep mathematical perspective, not necessarily mathematicians, in fact not mathematicians, usually physicists who have a very good, sound training in mathematics. I wanted to hire this person to be an assistant professor, and I was voted down. So there are these kinds of conflicts. You know, I see myself criticizing the mathematics community and similarly the computer science community, and I think any similar community, as too much narrowly focussed around a tradition, and not understanding things happening outside of it.

JOS: I see that some of your latest work is on evolution of language, and also one of your open problems for the new century is on the limits of intelligence.

SS: That's the problem that I work on all the time now, for five years. We call it learning theory. It talks about the fundamental problems of intelligence and learning, both from the human and machine side. A lot has been happening in this area, called learning theory.

JOS: The limits of intelligence is a very deep problem. It's not going to have a quick solution.

SS: Right. (laughs) Right. But you know, learning theory is the closest part of a solid science dealing with both.

JOS: Since the word intelligence has come up, I can't resist asking your opinion of the intelligent design movement, if you've followed it at all.

SS: I don't follow it. You know, I'm pretty negative about it, about the religious basis of science. I don't pay much attention to it.

JOS: Let me ask you about electronic journals. That's a development that's happened in the last 10 years that's really grown. Do you think it's a positive development?

SS: Yeah. But I don't think of it too much in those terms. I just think in general the computer, the transmission of information via Internet, is a revolution, a change in the way one thinks about libraries and information and research. It affects me a huge amount. I don't hardly ever use libraries nowadays. I used to use libraries, 30 years ago, intensively. I used to just, you know, browse in libraries a huge amount. Now I browse on the Internet.

So I wouldn't want online journals to be the main focus. You need to think in the more broad sense. I use Google, not online journals. When I want to find something I want to learn about, I use Google. Sometimes Google, sometimes Google Scholar, sometimes other things, but I start with Google, type in a few keywords. So that's quite a revolutionary way of researching, doing research in science

JOS: Do you think that in the future it will be mostly preprint archives, with no refereeing process, and people decide the quality on their own, or is there still a place for peer review?

SS: (Laughs) Well, there's probably some place for peer review, yeah, I think there is. Getting some feedback is important. When I was young, peer-reviewed papers were the main method, and now. But it's been gradually happening, even before internet, preprints were more and more common, and finally internet. But you know, when I was a student, preprints were very rare.

JOS: Maybe we could turn to minerals now. Do you think being a mathematician influenced you strongly in becoming a mineral collector, or is it more or less coincidental?

SS: Oh, I don't know. I wouldn't say either. Maybe coincidental is closer. I don't believe much in coincidences, you know, there is a background. It started with Clara, and with my father, who bought me a mineral.

JOS: Did you ever collect in the field?

SS: No, I never collect in the field. I've been in some mines. I don't purchase things so much, I trade.

JOS: On your website you say that in 1969 it was possible for a person of
moderate means to assemble a mineral collection that would rival those of museums. Do you think that's still true?

SS: Probably. Mineral museums don't really have the resources. Individuals have more money to spend each year for minerals than museums. Museums sometimes have endowed mineral collections, but if they're not careful, they get sold away. So, you know, you can compete with museums for minerals. Museums are occasionally endowed, like the one in Houston.

JOS: What do you think of that book, Masterpieces of the Mineral World?

SS: It's good, it's a good book. It's a very good book. Yeah. But you know, I have some issues with the book. First of all, it doesn't give enough credit to the main contributor, Jeff Scovil, in the book itself. So there was a big outcry about that and eventually they added something. The book itself just has a small mention, a note.

You know, our book is going to be a lot better as far as the processing of photographs. We do it in Germany, not in Asia. And we pay a lot more attention to processing the photo. I mean it's the difference between the Mineralogical Record. We have a picture there, you probably saw it, every month, every issue, which I think is not too good. Yeah, it's better than most magazines, but it's not nearly as good as extraLapis. You know extraLapis?

SS: There they have a very, very good photograph reproduction, it's accurate. So our book is being published by extraLapis. Their first book, actually.

Back to the Houston book, that did suffer because they didn't have the contrasting tones and accuracy, so the minerals don't stand out on the page. It's not bad, it's one of the best books. The best book is Bancroft, Gem and, uh.

JOS: I notice that at shows, older people predominate. Do you think the hobby is dying?

SS: No, no, I don't think so. The big show here is dominated by younger people, in my opinion. At the shows, all the big names are young. Big dealers, big collectors. Stuart Wilensky, Rob Lavinsky. All the big dealers are young. They're driving the whole Internet market. I don't see too much of the people out on the floors at shows. I don't know if their age has changed. Certainly there are some aspects that younger people may not be interested in as much as they were 30 years ago. Rocks shops have been replaced by shows and the Internet. But I see many of the dealers, they're young, very forceful people. They're all in their 30's. Rob Lavinsky, he's probably 30 by now.

JOS: I know that for a while the Blue Cap tourmaline you were famous for was one of your favorites. What's one of your current favorites?

SS: It's not a question of a single piece. Phosphophyllite. Jeremejevite. Aquas and tourmalines are some of the best.

JOS: There's a nice phosphophyllite in the Masterpieces book.

SS: Yeah, it's good. I like ours quite a bit better, though. Theirs is restored. That's one reservation I have about their book, they put in repaired and restored pieces without saying they were repaired or restored.

When people are selling, they're better about it. But in the Masterpieces book, they should have said repaired or restored.

JOS: Thank you very much.

Posted by Jeffrey Shallit at 7:20 PM