For those who haven't been to the Tucson gem and mineral show, here's a brief description.

As I mentioned before, it's not just one show, it's actually dozens. There are shows devoted to fossils and minerals, shows for gemstones, jewelry shows, bead shows, and shows for native American artifacts. Some are retail, some are wholesale only, and some are a mixture of both. Although I've attended the show 3 times since 2002, I've still only visited a small portion of what there is to see.

Some shows take place in hotel rooms. The dealers sleep and display in the same room. When they wake up in the morning, the beds are made, personal items are put away, and the minerals come out. Many people display their minerals on the hotel room beds and tables, and some have displays on tables outside the room.

Other shows take place in the Tucson Convention Center, or in the large tent across the street.

Shows definitely have their own character. For example, among mineral shows, the one at the Westward Look is for very high end collectors, those that don't bat an eye at paying four or five figures or more for a single specimen. Below that in average specimen cost are the shows organized by Marty Zinn, at venues like the Inn Suites Hotel and Clarion. And even below that are the shows along the freeway, such as at the Howard Johnson's, and the show at Tucson Electric Park. Many dealers head for the cheaper shows to pick up items that they then resell for twice the price (or more) at their own shows.

Here's an example. Among meteorite aficionados, the iron meteorites from Campo del Cielo in Argentina are held in low regard, in part because they are so common. They are probably the cheapest meteorites in price per gram. A dealer named "Giroldi" was selling them at the Howard Johnson's, with literally hundreds of specimens available. Here he is, posed with one of the largest pieces: 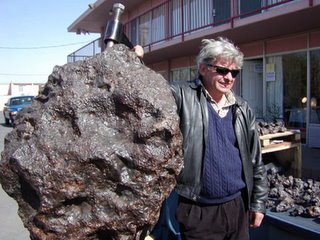 Later, I saw exactly the same meteorites for sale by meteorite dealers at the Inn Suites for twice the price. The lesson is that if you head down here, you might want to check out the cheaper shows first to see what the prices are.

I didn't spend much time at the show today. Instead, I went hiking with an old friend and colleague from Tucson.

It's been extremely dry here in the Southwest; the last significant precipitation in Tucson was almost a year ago. Normally Mt. Lemmon, to the north of Tucson, has a ski season, but not this year, since there is no snow.

We headed for the San Pedro River, the valley that is to the southeast of Tucson. This is an area that is famed for birding because it is one of the few places where there is running water. We got a late start, so we didn't see too many interesting birds. But I did notice how dry it was. Normally the cottonwoods would be much greener this time of year. 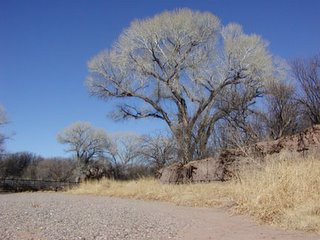 Posted by Jeffrey Shallit at 7:21 PM