A Hundred Years Ago Today - Part III - On Board the Merion

One hundred years ago today, a Rembrandt portrait sold at auction for $104,000. William Jennings Bryan temporarily blocked plans to create the US Federal Reserve banking system. And Harvard beat Yale 4-3, in 14 innings of baseball.

But for me, this is the hundredth anniversary of the day -- June 18 1913 -- that my grandmother, Zipporah Levinton, boarded the ship in Liverpool, England that would take her to her new life in America.

The name of the ship was the S. S. Merion, built in 1902 in Scotland. It was 162 meters long and 18 meters wide, and had her maiden voyage on March 8 1902. For most of her career, she sailed for the American Line from Liverpool. Although most people have a picture in their minds of all immigrants arriving at Ellis Island in New York, in fact many arrived elsewhere, including Baltimore and (in my grandmother's case) Philadelphia.

My family did not save any records of that trip, or if they did, they are long gone now. But I managed to find a postcard of the Merion, and here it is: 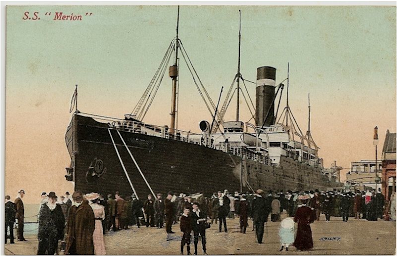 If you look closely at the postcard, you can see what appears to be a rabbi in the front left section of the card.

And here is my grandmother and her children (and one from my grandfather's first marriage) listed in the Outwards Passenger Lists from the Records of the Board of Trade and of successor and related bodies, The National Archives, Kew, Richmond, Surrey, England:

Transatlantic ship travel was not completely safe. Of course, it was just the year before that the Titanic hit an iceberg in the north Atlantic and went down. (My grandfather emigrated on the Pisa in February-March 1912; just a month later, the Pisa encountered ice and was in the general vicinity of the Titanic when it sank.) And the Merion herself had several accidents, including a collision with a tanker on December 24 1912, off the coast of Delaware.

In August of 1913, the ship's commander would have been J. Beattie Hill, and the outgoing passenger records indicate he was the commander for my grandmother's trip, too. The ship records show that the Merion stopped on August 19 in Queenstown (now Cobh), Ireland to pick up more passengers. All together there were (from the records I have access to) 1,036 passengers on the Merion headed to Philadelphia.

In 1914, the Merion was sold to the British navy, where it was used as a "decoy", and outfitted to look like the British battleship Tiger. On May 29 1915 this decoy ship was sunk by a German submarine.

For now, I'll leave my grandmother on the Merion, as the whistle sounds and the ship slowly leaves the port in Liverpool...

Posted by Jeffrey Shallit at 3:25 PM

...you can see what appears to be a rabbi in the front left section of the card.

Nah, that's Charles Darwin, for sure.

It's probably not well known outside the U.K. but a lot of gaelic speaking scots were evicted from their crofts (small farms)in the 19th century. The landowners seemed to act with callous indifference even though their tenants faced starvation. Many emigrated to North America. Wiki says there were an estimated 100,000 Gaelic speakers in Cape Breton around 1900.

my great grandmother was on that ship as well came from kerry ireland to philadelphia, her name was catherine or katie barry, thank you for posting this picture, now I am able to see the ship she came on!

If you do a little more research, you will find that this ship was built as one class only, so any ancestors lucky enough to sail on her went in comfort.

See http://www.atlantictransportline.us/content/69Merion.htm
for a bit more detail and some interior photos.

Jennywiom: I don't think you're right.

Take a look at this. This list of "cabin passengers" is evidently intended to be complete; yet there are many, many passengers missing from the list (as you can verify by looking at the manifest).

There is no way my ancestors could have afforded a luxurious fare.

Did you look at the link I gave, which related to Merion and her twin sister?

"These two ships were, "following the usual practice of the Philadelphia service," fitted to carry one class of passenger only, in accommodation considered equal to first class on other ships."

Cabins may well have been of different standards, but the accommodation was effectively first class throughout, like modern cruise ships have one class, though some passengers have balcony cabins, and some go for something a bit more basic.

Dining may not have differentiated between "classes", however it may have been like the current Cunard style, where you go to a "better" dining room if you have a suite!

Anyway, she seems to have been a nice ship, and deserved to "live" longer than she did.

Yes, but I don't believe everything I read.

Did you follow the link I gave and look at the manifest?

There were clearly at least two different classes: "cabin", which were listed on the little handout, and something else. The "something else" was likely what is called "steerage".

At least, that's the way I interpret the documentary record. If you have some other evidence, I'd be happy to read it.

As further evidence, I know exactly how much my ancestors paid to come. It was $36 for my grandmother, a fee that is almost exactly the same as a "3rd class fare" listed here.

There is simply no way you could get luxurious accommodations for $36 on a transatlantic voyage in 1912-1913.

gives the various fares for the classes. The amount my grandmother paid in 1913 matches 3rd class, not 1st or 2nd class.

This gets even more fascinating the more you look into it! Yes, I was wrong about cabin grades! This link http://www.netsnake.com/wallachs/passage/hyman.html
includes a copy of an American Line brochure of the period, which says that on these ships there is only one class of cabin passengers. "On this service we call this Second Cabin. As there are no other cabin passengers carried, the passengers naturally have the best of everything on the ships".
The fares were clearly not going to get anywhere close to those of Ist Class passengers on the much faster Titanic ($150), but $36 was still a lot of money. If they went "steerage", that looks rather excessive.
Sorry to have stirred things up, but hopefully I've provided a bit more information about the ship, and I've found it interesting. Cheers.

Thanks for the info. Trying to figure out exactly what happened 100 years ago is not always easy, and there are often conflicting claims.

Sorry, it's me again.

Just found a far better brochure for the ship.
http://www.gjenvick.com/HistoricalBrochures/AmericanLine/1907-Philadelphia-Queenstown-LiverpoolService-2ndCabin.html#axzz3FMlDGJMC

Jenny, if you send me your e-mail address, I'll send you a copy of another document from the Merion that I bought on ebay. You can easily find my e-mail address with a google search.

My Grandmother and her family came on the Marion in 1912.
How would I find Passenger lists for that year?

They are in a variety of places. For example, on ancestry.com (paid site) here:

and here on a free site (registration required):

My grandmother, elizabeth bremm, made this voyage from liverpool to Philly on July 23, 1913, she was german, but from russia, my mother was named after this ship , though the spelling changed years later to marion, my grandmother's destination, lincoln nebraska. Later on, in the 1990s my family purchased a 34 tollycraft, my mother's name, "marion lee" graced the boat,

Jeffrey, Both my great-grandmother and my grandmother came from Scotland to Liverpool to Philadelphia on the SS Merion. My grandmother was only 6 months old at the time of the voyage and she was born on 12/2/12 in Glasgow, Scotland. She may have been on the same voyage as your relatives. I know I located the passenger list at one time and would like to find it again. My great-grandmother's name was Margaret McCann and my grandmother was Elizabeth McCann. I believe she was listed and infant or baby McCann. Do you know where I can locate the passenger list?
Thank you.

I found a Lizzie McCann on the Merion, leaving Liverpool June 18 1913 and arriving Philadelphia June 30 1913. If you contact me by e-mail (find my address with a google search) I can send you the images.

My ggrandfather is on the Merion from Philadelphia to Queenstown Apr 30 1914. Probably the last trip before the British took it over for the decoy. The trail for him goes cold after his departure. Anyone aware of any documentation showing arrival in Cobh for this line?

My great grandfather was a fireman on SS Merion and her sister ship. Only found this out of late.

In his later life he suffered terribly with lung disease likely caused by his time at sea.