One Hundred Years Ago Today

A hundred years ago today -- June 4 1913 -- a British suffragette, Emilie Wilding Davison, threw herself in front of the King's horse at the Epsom Derby, and was gravely injured. She died 4 days later. On the same day in France, Aristide Briand, a former Premier, almost died in a car accident. You can read about these events here.

But in Hamburg, Germany, another event took place that you won't find in any newspaper: my grandmother, Zipporah Levintan, boarded the Stockport to Liverpool, on the middle leg of a journey that would take her to join her husband (my grandfather) in Philadelphia. 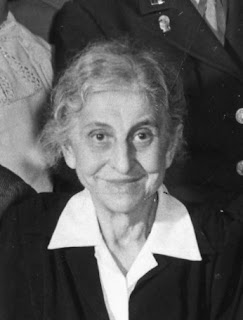 In Hamburg she was likely helped by Jewish groups that assisted emigrants. Between 1901 and 1906, the Hamburg-Amerikanische Packetfahrt-Actiengesellschaft built an emigrant city in Veddel (the port area of Hamburg) with a canteen, a sleeping hall, and a synagogue. This wonderful page has pictures of the city and its buildings. Note the inscription "Mein Feld ist die Welt" on the wall in the emigration hall.

How she got to Hamburg, I don't know for sure. In 1912 she was living on Pokvrovske Street in Vitebsk (now in Belarus), according to a ship manifest for my grandfather, who had already emigrated the year before. ("Pokrovske" was the Yiddish name for "Pokrovskaya", the celebrated street where Chagall lived; today there is a museum honoring him there.) In 1913, according to a bank record, she was living in the small town where she was born: Velizh, Russia. Perhaps she would have travelled by land; the German government had set up immigrant checkpoints at Eydtkuhnen, on the border with Lithuania (now Chernyshevskoye in the Kaliningrad Oblast, Russia) and Ruhleben (near Berlin). Or perhaps she made her way to Lithuania or Latvia, and then caught a boat along the Baltic Sea to Hamburg. I only know that the manifest of the Stockport, which lists her previous place of residence (Bisheriger Wohnort) as "Kowno" (now Kaunas in Lithuania).

I haven't found a picture of the Stockport, but there is a postcard that shows its sister ship, the Bury, here. And this page tells more about the ship, which was owned by the Great Central Railway Company, one of a number of "feeder" ships that brought emigrants to ports like Liverpool for the longer transatlantic voyage that awaited them.

The ship manifest shows that my grandmother was accompanied by four children: Schmuel, age 9; Dwoire, age 7; Salman, age 3; and Mendel, age 17. I would know them by different names: Sam, who died four years before I was born; my Aunt Dorothy, my uncle Si, and my father's half-brother, Max, who died ten years before I was born. Like many Russian Jews of the period, they were leaving to escape persecution (my grandmother's grandfather was falsely imprisoned in the Velizh blood libel incident) and for a better life in America. As my uncle Si once wrote, "What if Washington Avenue was a dirty, grimy street? What if freight cars loaded with soot chugged up and down? What if the streets were not paved with gold as they had told us back in our little ghetto town in Russia? Here we had found something far more precious: freedom!"

The voyage to Liverpool took 10 days. I don't know for sure what the conditions must have been like, but since my grandparents were terribly poor, I imagine they were pretty awful. Unable to read or write, my grandmother must have found the trip baffling and frightening. She died in 1964, when I was only 6, so I never had the chance to ask her for her memories of the trip. For now, I leave her here in Hamburg, about to board the ship...

Interesting. Along those lines, the big news in Canada this week is that the 1921 census records have just become legally available to the public for the first time. Genealogy buffs across the country are now patiently waiting for the data to be published at the Library and Archives Canada web site....any day now.

I enjoyed this story Jeff and posted links on our society's blog: http://jewishgenealogytoronto.com/2014/03/jeff-shallits-family-history.html